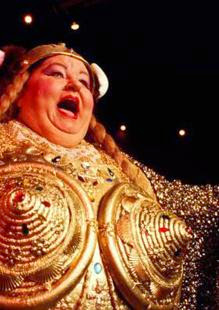 ... the fat lady has officially sung!

The tiny town of Latta, South Carolina, with just 1,400 people, had a female Chief of Police who happens to be a lesbian. Despite having been on the police force for 23 years with a spotless record, she was fired by the new Mayor, supposedly for questioning authority and failing to maintain order, among other pretexts.

Then an audio recording of the mayor's homophobic rant surfaced:


"I would much rather have ... and I will say this to anybody's face ... somebody who drank and drank too much taking care of my child than I had somebody whose lifestyle is questionable around children.

Because that ain't the damn way it's supposed to be. You know ... you got people out there -- I'm telling you buddy -- I don't agree with some of the lifestyles that I see portrayed and I don't say anything because that is the way they want to live, but I am not going to let my child be around.

I'm not going to do it. Because that ain't the way the world works.

Now, all these people showering down and saying 'Oh it's a different lifestyle they can have it.' Ok, fine and dandy, but I don't have to look at it and I don't want my child around it."

The townsfolk rose up in protest and eventually held a referendum that overwhelmingly passed and stripped the mayor of much of his powers and transferred them to the town council. Last night, Crystal Moore was reinstated as police chief.

This is an example of antipodian philosopher John Wilkins' 95/95 rule: 95% of people are decent human beings 95% of the time. It is also an example of the power of familiarity. When you know people who are gay and realize that they are human beings, just like you; when you know that they are your friends and neighbors and even family members; when you see them as people with the same hopes, aspirations, sorrows and tragedies as you have; it is oh so much harder to hate them ... so much harder to stand by silently when the hatred by others tries to destroy them.

I have said all along that the most powerful aspect of the many recent court decisions in favor of equal rights for gays is not the legal reasoning or the sometimes soaring rhetoric, it is the stories of the people involved ... how ordinary they are, how so much like the rest of us they are. If you are one of the 95% and operating as you should that 95% of the time, you cannot help but to come to the aid of people like Crystal Moore.

Congratulations to the people of Latta, South Carolina!

For the haters who still insist it isn't over ... that LGBT bigotry can still make a comeback ... I say when you can't make a firing of a gay person just for being gay stick in a small town in South Carolina, it's OVER!!!
Link - Posted by John Pieret @ 1:00 PM

Comments:
Yes, it is over.

But the religious right promise to continue entertaining us with their objections.

A heart warming story and you're right it is over. However the "zombie" that is the anti-gay (& lesbian etc.) segment of the country is sadly going to groan and stumble around for a while yet causing misery whenever and wherever it still can.

the anti-gay (& lesbian etc.) segment of the country is sadly going to groan and stumble around for a while yet causing misery whenever and wherever it still can

Yes, they will. The good news is that, the more they do so, the more they are revealed to be hateful bigots even to their fellow religionists. It is no accident that the real turning point in racial civil rights was the revelation of the murderous hatred of the KKK and the only slightly less violent hatred of people like Lester Maddox.

Ultimately, the haters are their own worst enemies.

I had read that the mayor signed a contract with a straight, manly-man, setting him up to be police chief.

I can't find the original story. Do you know anything?

The mayor did that but under the new form of government the council could and obviously did fire the mayor's choice and restored Moore: