Stupid In the Name of Religion 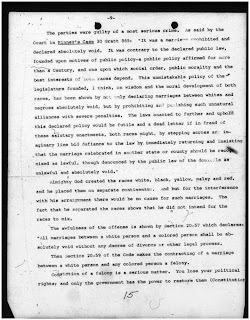 The North Carolina News and Obsever has a story, entitled "Backlash against marriage ruling rises as voting starts," about black Christian wingnuts losing their minds about the recent gutting of the state's ban against same sex marriage. I am particularly amused by this:

"We hear this all the time," he said. "This is the most specious comparison that I've ever heard in my life."

The Bible does not condemn interracial marriage, he said, but it does homosexual relationships.

Really, Bishop? Where, exactly, in the Bible is same sex marriage condemned? Oh, sure, the Old Testament, at Leviticus 20:13, says that a man who has sex with a man should be put to death (but, note, it doesn't say that a woman who has sex with a woman should be put to death). Is that the law you want in North Carolina? ... that gay men should be stoned to death? The New Testament, at least as far as Paul was concerned, called homosexuals "sinners." But wait a minute ... under your religion aren't we all "sinners"? So no one should have Constitutional rights?

But the bigger question is, do you really want that big evil government deciding what the Bible and Christianity really says? After all, the state judge in the Virginia v. Loving (click on the image of the record to the right) was convinced that:


[The Loving's marriage] was a marriage prohibited and declared absolutely void. It was contrary to the declared public law, founded upon motives of public policy -- a public policy affirmed for more than a Century, and one upon which social order, public morality and the best interests of both races depend. This unmistakable policy of the legislature founded, I think, on wisdom and the moral development of both races, has been shown by not only declaring marriages between whites and negroes absolutely void, but by prohibiting and punishing such unnatural alliances with severe penalties. The laws enacted to further and uphold this declared policy would be futile and a dead letter if in fraud of these salutary enactments, both races might, by stepping across an imaginary line bid defiance to the law by immediately returning and insisting that the marriage celebrated in another state or county should be recognized as lawful, though denounced by the public law of the domicile as "unlawful and absolutely void."

Almighty God created the races white, black, yellow, malay and red, and he placed them on separate continents. And but for the interference with his arraignment there would be no cause for such marriages. The fact that he separated the races shows that he did not intend for the races to mix.

Should some Federal judge be deciding what, exactly, the Bible and Christianity really says? Or do you just want to enshrine you own interpretation of the Bible into the law?

When people with a different interpretation of, say, the "Curse of Ham" are in the majority, you may regret it.
Link - Posted by John Pieret @ 12:27 PM

Comments:
Almighty God created the races white, black, yellow, malay and red, and he placed them on separate continents.

In light of what is actually known, how can anyone possibly call this a rational argument? It was just as baseless when it was written as it is now.
And, yes, there are people who advocate death by stoning for "disobedient children" and other sinners. Right here in the USA.

how can anyone possibly call this a rational argument?

Beats the heck out of me. But it was made, and rejected by SCOTUS, only about 50 years ago. Hopefully, in a "mere" 50 years from now, everyone will be saying the same things about the arguments against SSM.

And, yes, there are people who advocate death by stoning for "disobedient children" and other sinners. Right here in the USA.

Fortunately, most people's eyes go wide and they walk away from such people quickly, muttering something that sounds a lot like "assholes."