Sometimes You Can't Make This Shit Up! 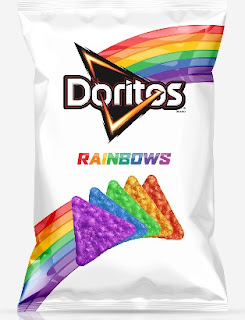 Doritos announced that it was coming out with a “rainbow” version of its Cool Ranch chips. It was a limited release in support of the “It Gets Better Project,” that gets celebrities, organizations, activists, media personalities and politicians, including President Obama, to record videos intended to inspire hope for young people facing harassment. The only way you could get the chips was if you made at least a $10 donation to It Gets Better. The chips were snapped up within days, though It Gets Better is hoping to get more.

As you can imagine, heads in the religious right were exploding in a pretty fireworks display.

But the head that made the strangest pop belonged to one Ed Straker at the oxymoronic American Thinker. First of all, in accordance with the intellectual chops of the site, Straker got the facts wrong and asserts that there will be general distribution of the chips, including to children.

But Straker has a clever plan! Besides the obligatory (and ineffectual) boycott against Doritos and its parent company, Pepsi, there is this:


Furthermore, I think we should push other companies to launch pro-heterosexual campaigns. Perhaps we could persuade a hot dog maker and a hot dog bun company to do a joint effort promoting man-woman relationships. 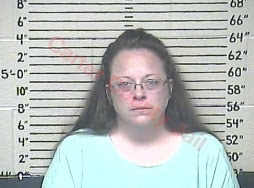 Well, Kim Davis got what she desperately wanted.

She is now a faux martyr.

Federal Judge David Bunning has ordered her civilly confined until she is willing to comply with the court's order to have her office resume issuing marriage licenses. Interestingly, the plaintiffs' filing asked that she not be confined but merely fined (probably anticipating that the the right wing fever swamps will use this to make her into a “martyr” and claim that this is the beginning of the “criminalization” of Christianity). But Judge Brunning stated that mere fines would not be sufficiently coercive because she was already receiving monetary support from outside sources to pay them. So he chose confinement instead. Davis even said “Thank you, judge” as she was being led away.

She is not been subjected to a criminal penalty, it is purely civil and, in a nice phrase the courts use, “she has the jailhouse keys in her pocket.” All she has to do is agree to obey the order and she will be freed. Indeed, she had that opportunity within hours of her being held in contempt. Five of her six deputy clerks (the only hold out is Davis' son … there is a fine tradition of nepotism in Rowan county, as Davis was a deputy clerk under her mother for 30+ years before she was elected to the post) are willing to to issue the licenses. As long as she agreed not to interfere with them doing her job, she would be freed. But she refused because her name appears printed on the form (as the county clerk) she would still somehow be “authorizing” same-sex marriages. Magical thinking at its finest.

So, she will stay in jail, where she can't stop her deputy clerks, and the issuance of licenses will resume on Friday.

I hope she enjoys that Crown of Publicity.
Link - Posted by John Pieret @ 5:27 AM 63 comments