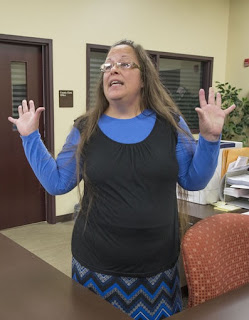 I'm sorry the blog has been moribund of late, due to recent changes in my life.

I'm going to try to make it more regular.

Now here is something somewhat interesting. The Kentucky Legislature has met for the first time since the Supreme Court decision in Obergerfell v. Hodges and, of course, since Kim Davis made herself into a “martyr” for no good reason.

So, the Kentucky Legislature has a bill pending (SB 5) that basically bows to Davis' martyrbation by removal from marriage licenses/certificates forms any “authorization statement” by the county clerk, signatures by a county clerk or deputy clerk, and a very confusing change concerning the statement that the marriage certificate was recorded.

The somewhat interesting thing is that the original bill mandated two separate forms, one for heterosexual couples, where the couple is identified by "bride" or "groom," and one for same-sex couples, identified as "first party" or "second party."

Kentucky State Senator Morgan McGarvey suggested an amendment to the bill to eliminate the two different forms. He discussed the amendment at a recent county clerk’s meeting before the vast majority of Kentucky’s clerks, As McGarvey explained his amendment: “My own reasoning is simple. One form is easier to handle, less expensive and puts everyone on equal footing.” Davis was there and McGarvey explains what happened:


“After passing out sample forms and answering a multitude of questions and hypothetical scenarios, Kentucky’s clerks seemed to agree that one form is how we should proceed.

“Then Mrs Davis stood up to speak. We had never met and I had no idea what to expect.

“To my pleasure, and admittedly my surprise, Mrs Davis agreed with my amendment and my approach.

“In front of a room full of her colleagues she emotionally acknowledged her role in causing this debate but whole-heartedly endorsed my amendment. “As Mrs Davis told the other clerks, they should support my amendment because using two forms just invites problems.