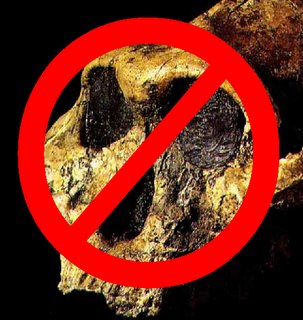 There is a terribly disturbing report in the Daily Telegraph (UK). Mike Pflanz reports, in an article entitled "Evangelicals urge museum to hide man's ancestors," that:

Powerful evangelical churches are pressing Kenya's national museum to sideline its world-famous collection of hominid bones pointing to man's evolution from ape to human.
Leaders of the country's six-million-strong Pentecostal congregation want Dr. Richard Leakey's ground-breaking finds relegated to a back room instead of being given their usual prime billing.

The museum has the most complete skeleton yet found of Homo erectus, the 1.7 million-year-old Turkana Boy found by Dr. Leakey team in 1984 near Lake Turkana in northern Kenya, along with "several specimens of Australopithecus anamensis, believed to be the first hominid to walk upright."

As part of an ongoing expansion funded by the EU, the National Museums of Kenya, which manages the country's cultural sites, is conducting a survey to determine what visitors to its Nairobi headquarters most want to see.
Church leaders aim to hijack that process. "The Christian community here is very uncomfortable that Leakey and his group want their theories presented as fact," said Bishop Bonifes Adoyo, the head of Christ is the Answer Ministries, the largest Pentecostal church in Kenya.
"Our doctrine is not that we evolved from apes, and we have grave concerns that the museum wants to enhance the prominence of something presented as fact which is just one theory."
Bishop Adoyo said all the country's churches would unite to force the museum to change its focus when it reopens after 18 months of renovations in June next year.
"We will write to them, we will call them, we will make sure our people know about this and we will see what we can do to make our voice known," he said.

Dr. Leakey is, of course, appalled:

"The collection it holds is one of Kenya's very few global claims to fame and it must be forthright in defending its right to be at the forefront of this branch of science."
Calling the Pentecostal church fundamentalists, Dr Leakey added: "Their theories are far, far from the mainstream on this. They cannot be allowed to meddle with what is the world's leading collection of these types of fossils."

The really disturbing part of the article is the indication that the government is ready to fold under the pressure:

"We have a responsibility to present all our artefacts in the best way that we can so that everyone who sees them can gain a full understanding of their significance," said Ali Chege, public relations manager for the National Museums of Kenya.
"But things can get tricky when you have religious beliefs on one side, and intellectuals, scientists or researchers on the other, saying the opposite."

Why do I get this sinking feeling that "tricky" really means "tough luck, Doc"?
Link - Posted by John Pieret @ 11:02 AM

Comments:
Just wondering what they'd think if the fossils were exhibited with this note attached to the description: Some faiths teach that instead of the above explanation, God created these fossils to give the appearance of age and common descent because He wants to see if we'll fall for His little joke so he can send us to Hell if we do.

Turkana Boy is one of the fossil evidences for Creation by God. I am looking for years for the possibility of winds, rains, sunlight, heat, cold etc. coming together to generate just one bit of a living thing... such as a flower, a rabbit, a horse, a butterfly? All I read is evolutionary "stories" with speculations, extremely dogmatic indoctrinations that evolution "somehow should have happened". Why is this ignorance of the facts? Look at www.evolutiondeceit.com for evidence of Creation. Or just explain how the billions of nucleotides are in perfect sequence by chance? Could you blindfolded put the billion letters next to each other to code for your own eye, liver, brain? I wonder if anybody can? Thanks for this opportunity, I respect your thoughts but please consider mine also...

What does the "coming together to generate just one bit of a living thing" have to do with evolution? If you want to stake your faith on our never finding a natural way that life could start, fine by me (though you might want to do a bit more "looking" into the recent work on abiogenesis before you take such a radical step). But if you want to see the evidence for common descent, which assumes that life got started somehow, go here.

If well-tested inferences from massive amounts of evidence are not good enough for you then nothing in science will be good enough. That's okay. If you don't want to believe science returns reliable knowledge, that's your right ... though asserting that right via a computer connected to the entire world because of people using exactly those methods to cereate the computers and connections is more than a tad ironic.

Nor does evolution have anything to do with assembling an eye by chance. You should at least know what you are rejecting.

Trust me, I've been at this for years now and there is nothing at Evolution Deceit that I haven't seen many times before. If you find anything there that isn't addressed at Talk Origins, let me know and I'll find a place you can go to find out about it.