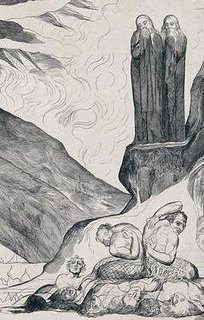 You may have seen (if you frequent Wingnut Daily) the "news" that D. James Kennedy, head of the megachurch Coral Ridge Ministries and budding theocrat through his support of Dominionist theology, has produced a television "documentary," Darwin’s Deadly Legacy, that reprises the tired allegation that Darwin caused Nazism. As Kennedy himself, loaded down with unintended irony, said "[t]o put it simply, no Darwin, no Hitler." The program will no doubt be fully appropriate for simpletons, given its lineup of "experts" who are well schooled in playing to the ignorazzi, including Ann Coulter, Lee Strobel, Jonathan Wells and Phillip Johnson.
What surprised everyone was that Francis Collins, Director of the Human Genome Project, had apparently lent his name and time to the project. While Collins is an evangelical Christian and has been much in the news of late, as a result of his newly-released book, The Language of God: A Scientist Presents Evidence for Belief, he has always staunchly defended evolutionary theory from creationist attacks. That he would support charges that Darwin's theory somehow contributed to the rise of Hitler and the Holocaust, did not seem in character.
PZ Myers at Pharyngula is now reporting that Collins has replied to the news release and was, in an email, "unambiguous in stating that he was interviewed about his book, and that was then inserted into the video without his knowledge."
While we will no doubt be hearing more about this, I, for one, would hardly be surprised if Kennedy is guilty as charged of venal dealings with Dr. Collins. After all, if you set out to dishonestly blacken the name of a dead scientist, why blanch at disingenuously hijacking the reputation of a living one?
The really funny part is that Kennedy and his ilk had better hope they are wrong about the existence and nature of God. By some reports (as in Blake's illustration of Dante above) He takes a dim view of falsifiers.
.
Link - Posted by John Pieret @ 7:25 PM