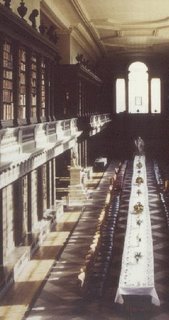 Casey Luskin is shocked, shocked, to find out that some school officials think that Wikipedia is not an authoritative source for primary research and has published his amazement in the Discovery Institute's Media Complaints Bulletin under the title "Notice to Students: Wikipedia No Longer an Acceptable Source." Cynics might suspect, given its consensus-based editing, that IDeologists' inability to manipulate the message about their dishonest attempts to inject their religion into taxpayer supported schools is the basis of Luskin's glee at the "news."

Those in the reality-based community might be shocked to learn that there was any question about Wikipedia's academic status.

The best way to use Wikipedia is to get a global picture of a topic. It's not a primary source, and in college, you probably should not be citing an encyclopedia.

Greg Reihman, the Lehigh faculty development director, encourages students to use the Web site "to get a quick snapshot or an initial sense of views as they are commonly understood," according to university spokeswoman Dina Silver Pokedoff.

It seems that Lehigh University is, once again, more academically savvy than the ID crowd.

And, once again, we are faced with the conundrum of whether Casey Luskin is being incredibly stupid or all-too-credibly disingenuous.
.
Link - Posted by John Pieret @ 6:13 AM

Comments:
Really? He needed the Seattle Times to tell him this?

I of course assume that his warnings also apply to other user written encyclopedias. Like Conservapedia.

Given that he has a masters in some earth science major AND a J.D., he must have at least hung around univeristies before. This leads me to suspect that his lachryma have more than a little of the Crocodylidae about them.