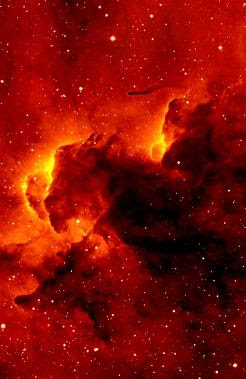 The anthropic argument for Intelligent Design has taken a hit. Based on the notion that the physical constants of our universe have to be "finely-tuned" -- by some intelligence, of course -- to produce a locale favorable to life as we know it, the force of the claim relies on there only being a narrow band of "settings" that produce our kind of universe.

Fred Adams, a theorist at the University of Michigan in Ann Arbor, embarked on a study to determine if universes in which the constants of nature had different values could still support the existence of stars, one obvious requirement for the formation of life like that on Earth.

By allowing all three of the parameters, rather than a single parameter, to vary, Adams created a simulation that may embrace a larger number of possible universes, he says. He finds that stars are stable entities in roughly one-fourth of the universes he considered. "That's a sizable amount of real estate."

Anthony Aguirre of the University of California, Santa Cruz explained:

The findings have several intriguing implications, he adds. Had Adams found that the range of parameters that allowed for stars was very small, that would have suggested that the laws of physics in our universe have been "fine-tuned" to allow for star formation ... Instead, Adams' study shows that our universe doesn't seem particularly special in that regard.

It is precisely this secondhand reflected "specialness" that creationists seek ... the "importance" of being a pampered pet of the well heeled but cranky landlord.
.
Link - Posted by John Pieret @ 9:51 PM

Comments:
And the gaps continue to narrow, ladies and gentlemen.

The God of the Gaps is going to run out of real estate here real shortly. Prepare for hours of entertainment as the IDiots scramble to find him another place to live.

Unfortunately, I suspect you underestimate the power of human ingenuity. ;-)