Nearer, My God, to Thee 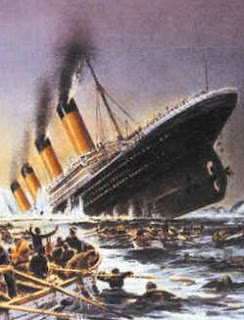 Maybe John McCain is learning what most of the rest of us already suspect about Sarah Palin.

According to CNN, Sarah's not about to play "good soldier" in a campaign that's looking more and more like the political version of the Titanic.

Several McCain advisers have suggested to CNN that they have become increasingly frustrated with what one aide described as Palin "going rogue."

A Palin associate, however, said the candidate is simply trying to "bust free" of what she believes was a damaging and mismanaged roll-out. ...

A second McCain source says she appears to be looking out for herself more than the McCain campaign.

"She is a diva. She takes no advice from anyone," said this McCain adviser. "She does not have any relationships of trust with any of us, her family or anyone else.

"Also, she is playing for her own future and sees herself as the next leader of the party. Remember: Divas trust only unto themselves, as they see themselves as the beginning and end of all wisdom."

As for the blame for the disastrous interviews Palin gave at the outset of her campaign, Palin apparently lays that at the feet of McCain advisors Nicolle Wallace and Steve Schmidt for limiting her initial press contact to high-profile interviews with Charlie Gibson of ABC and Katie Couric of CBS. As reported by Politico, the idea is apparently that if she had been making a fool of herself in local news interviews instead of saving it all up for high profile national broadcasts, it would have lessened the impact -- or something. Meanwhile, even some in her own camp lay the blame more on Palin's inexperience and, for want of a better word, unteachability:

[T]wo sources, one Palin associate and one McCain adviser, defended the decision to keep her press interaction limited after she was picked, both saying flatly that she was not ready and that the missteps could have been a lot worse.

They insisted that she needed time to be briefed on national and international issues and on McCain's record.

"Her lack of fundamental understanding of some key issues was dramatic," said another McCain source with direct knowledge of the process to prepare Palin after she was picked. The source said it was probably the "hardest" to get her "up to speed than any candidate in history."

In other news, as noted by Ed Brayton, George Packer, in the New Yorker, is reporting that another high-profile conservative stalwart has abandoned ship and giving Palin as a primary reason why.

Ken Adelman is a lifelong conservative Republican. Campaigned for Goldwater, was hired by Rumsfeld at the Office of Economic Opportunity under Nixon, was assistant to Defense Secretary Rumsfeld under Ford, served as Reagan's director of arms control, and joined the Defense Policy Board for Rumsfeld's second go-round at the Pentagon, in 2001. ...

Adelman gives two reasons for abandoning McCain, his temperament and his judgment:

When the economic crisis broke, I found John McCain bouncing all over the place. In those first few crisis days, he was impetuous, inconsistent, and imprudent; ending up just plain weird. Having worked with Ronald Reagan for seven years, and been with him in his critical three summits with Gorbachev, I've concluded that that's no way a president can act under pressure.

Second is judgment. The most important decision John McCain made in his long campaign was deciding on a running mate.

That decision showed appalling lack of judgment. Not only is Sarah Palin not close to being acceptable in high office—I would not have hired her for even a mid-level post in the arms-control agency.

But the Politico article also reports that there is a faction of Republicans who think Palin is the future of the party:

The emergence of a Palin faction comes as Republicans gird for a battle over the future of their party: Some see her as a charismatic, hawkish conservative leader with the potential, still unrealized, to cross over to attract moderate voters. Anger among Republicans who see Palin as a star and as a potential future leader has boiled over because, they say, they see other senior McCain aides preparing to blame her in the event he is defeated.

A battle between the religious right and traditional conservatives for the soul of the party? There's only one word for that:

Goody!
___________________________
.
Speaking of abandoning ship, Congressional Republicans are tacitly admitting that McCain is going to lose and, in order to save their own necks, are arguing that voters should be wary of one party holding all the reins of power in Washington. As the Washington Post notes, Norm Coleman and Libby Dole are prominent examples. But as the article goes on to illustrate, voters need not fear one-party rule ... as long as the party is the Democrats!
.
Link - Posted by John Pieret @ 1:12 PM

Comments:
The Republicans need to clean house. If that process includes tossing out the Religious Right wackos with the garbage, I say good riddance. This country needs a real conservative party, not a fascist mockery.

The Titanic's fourth stack (the one most aft) was purely decorational and would have no smoke coming out of it.

Barry Goldwater? The man was born in Arizona before it became a state, so clearly he wouldn't be eligible to run. :)