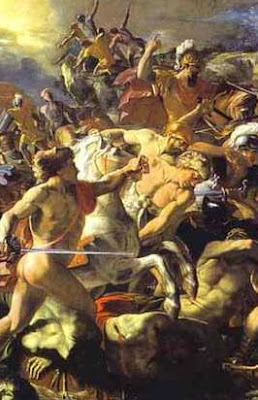 There is an interesting article, "Religion vs science: can the divide between God and rationality be reconciled?" by Paul Vallely in Britain's The Independent about the forces that rose up and bit Michael Reiss. To us in America, it might seem like undue worry on British scientists' part, given the relative sizes of our problems.

It is perhaps significant here that the two main instigators of the campaign to have Reiss ousted from his Royal Society job, Sir Harry Kroto and Sir Richard Roberts, are now based in the United States where creationism is a major phenomenon. Polls suggest that around 45 per cent of Americans are creationists with 40 per cent believing that God worked through evolution and just 10 per cent saying it was nothing to do with a God.

The experience of being a secularist in the US is clearly a radicalising one. "I don't know if it is too late to stop the slide in Britain but I think it is in the US where [the religious right] have now almost complete control over politics, the judiciary, education, business, journalism and television," Kroto, who won the Nobel Prize for Chemistry in 1996, has said, adding darkly: "The Royal Society does not appreciate the true nature of the forces arrayed against it."

In the days of Thatcher all the mainstream Tories voted in favour of embryo research. Twenty years on most of the new suave modernising Cameroonian Tories vote against it." Academics detect a similar shift. Professor Steve Jones, of University College London, who has been teaching genetics and evolutionary biology for 30 years, has said that religious students – even those studying medicine – are becoming increasingly vocal in their opposition to evolution, demanding to be exempted from classes and exam questions on the subject.

Okay, but aren't the good guys supposed to be rationalists?

The fear generated by such tactics is what did for Michael Reiss. "Even if he doesn't support all this, what he said might be seen to give succour to it," says Andrew Copson of the British Humanist Association. "I can understand why alarm bells go off with people who are familiar with 'Teach the controversy' tactics of people who want to baby-step creationism into our science classrooms."

There are excuses, of course:

... Evan Harris is unapologetic about contributing to what Julian Baggini waggishly calls this "assertiveness inflation". "It's good that there's this tension," the MP says. "These debates need to be had in public. Science has nothing to fear from them. I don't think we're winning; we've won a few battles; but there's a war to be fought." He concedes that Michael Reiss may have been sacked unfairly – saying that the "overstrong line" taken by Kroto and Co should not be taken as representative of all on the secular side – but points out that employment injustices are perpetrated every time a church school refuses to appoint a maths teacher because she doesn't "have Jesus in her heart".

Ah! One injustice justifies another! I'll have to keep that in mind.
.
Link - Posted by John Pieret @ 7:13 PM