Another Vote for a Quality Candidate 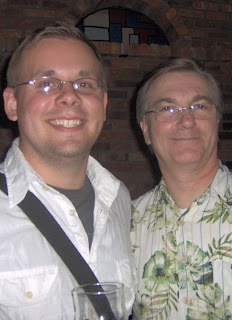 Brian Switek of Laelaps, as well as Smithsonian magazine's new blog, Dinosaur Traking, is one of the 20 finalists in the 2008 Blogging Scholarships and has a shot at winning $10,000.

Brian's work at Laelaps is some of the best writing on the history of science you'll find in the blogosphere, such as his recent post on the rise of anti-evolutionism resulting from the post-World War I revelation by biologist Vernon L. Kellogg of the German military's appeal to a kind of nationalistic selection as justification for the war.

Besides my admiration for his writing, even before he joined Scienceblogs, I had the pleasure of recently meeting Brian (he's the young handsome one) and he is a genuinely nice young man who deserves the scholarship in many different ways.