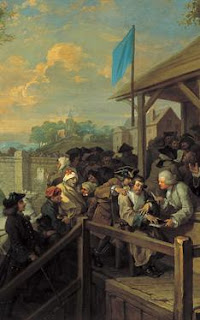 The Harris Poll released a new nationwide survey of 2,126 U.S. adults surveyed online between November 10 and 17, 2008. Some of the results:

-- Slightly more people - but both are minorities - believe in Darwin's theory of evolution (47%) than in creationism (40%).

Okay, if this poll can be believed, it’s good that more American believe in evolution (even if needlessly labeled “Darwin’s”) than in creationism but that may be more than overcome by the depressingly large numbers that believe in ghosts, UFOs, witches and astrology. I’m more sanguine about the religious beliefs because there are social factors preventing critical examination of those beliefs by the believers. But those factors should be missing in the “secular” subjects, like UFOs, etc.

But maybe this is the most telling result of the poll:

-- only 26% of all adults believe that the Torah is the word of God, even though it is the same as the first five books of the Old Testament. Presumably many people do not know this.

Maybe the most significant finding about Americans is their ignorance.
.
Link - Posted by John Pieret @ 9:57 PM

Comments:
Ignorance indeed. That was sobering, but unfortunately not unexpected.

Heck, I've been told that most Christians can't even name the first five books of the Old Testament, or put them in the correct order.

It does seem strange that people who invest so much of their identity in a book would know so little about it. But they are not alone ... you know how popular the label "American" is (it was practically the entirety of Palin's campaign) but a while back they did a poll of what Americans thought of an unidentified copy of the Bill of Rights and not only did few recognize it, many identified it (IIRC) as communist propaganda.

LOL. Those damned Marxists, trying to take over America! Oh, wait - they created it. Whoops.

I doubt that a single Founding Father could've been elected as President in the past few election cycles. Would be interesting to do a hypothetical match-up between some of our best Presidents and some of the worst dictators, much like what that poll did with the Bill of Rights. I wonder how these folks would feel having voted for Hitler?

Can anyone tell me ONE thing about Darwin's theory that we know to be true? Just one? I recently displayed a fact-filled debate between a lawyer and a preacher in my new novel. See the webpage at http://tinyurl.com/4d79yt

Quite a few things, actually. Naturally, that is within the limits of "true" that any science produces and understanding your "Darwin's theory" to be the modern theory of evolution (which still includes a lot of Darwin's ideas that have been validated by reams of evidence).