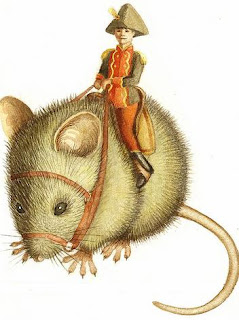 Unfortunately for Luskin, it's against Ken Miller sitting astride a war horse of logic, facts and the words of Michael Behe, whose demolition at the Kitzmiller trial Luskin is trying desperately, and unsuccessfully, to paper over.

Writing at Carl Zimmer's blog, The Loom, Miller parries with ease Luskin's feeble feints and leaves Behe's claim that the blood clotting cascade, or any part thereof, is irreducibly complex ... well ... bleeding on the floor.

As Miller rightly puts it:

So, what are we left with? Nothing more than a vain attempt to pretend that ID's collapse in the Dover case was the result of misrepresentation and deception. For Mr. Luskin and his employers at the Discovery Institute, the generation of sound and fury continues, but in scientific terms, their continuing noise signifies nothing more than the utter emptiness of their failed ideas.

Update II: Ken Miller's last piece at The Loom is an exploration of the possible motive for the Discovery Institute's assault on the Kitzmiller case, as exemplified by Casey Luskin's latest screed, at this late date:

Why are Casey and his employers now — three years after the Dover trial — trying to rehabilitate the tattered credibility of both Michael Behe and Pandas? What mischief are they planning now? The only conclusion I can draw is that they must be maneuvering for the next round of state board hearings or legislative sessions — and I'm concerned. These folks are a whole lot better at politics and public relations than they are at science, and that means that everyone who cares about science education should be on guard.

Update III: And just to keep these things together, here is Nick Matzke at The Panda's Thumb completing the evisceration of Luskin and his "arguments," including giving the evidence from Behe's own mouth that he wrote the portion of the "textbook," Of Pandas and People, that Luskin claims is different from Behe's views. Who's on first, anyone?
.
Link - Posted by John Pieret @ 9:16 PM