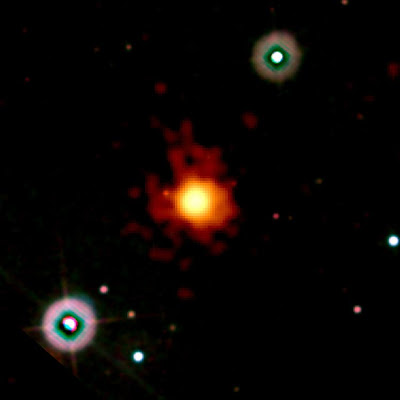 NASA's Swift satellite and an international team of astronomers have found a gamma-ray burst from a star that died when the universe was only 630 million years old, or less than five percent of its present age. The event, dubbed GRB 090423, is the most distant cosmic explosion ever seen. ...

Beyond a certain distance, the expansion of the universe shifts all optical emission into longer infrared wavelengths. While a star's ultraviolet light could be similarly shifted into the visible region, ultraviolet-absorbing hydrogen gas grows thicker at earlier times. "If you look far enough away, you can't see visible light from any object," he noted. ...

The source appeared in longer-wavelength images but was absent in an image taken at the shortest wavelength of 1 micron. This "drop out" corresponded to a distance of about 13 billion light-years.

That, of course, is evilutionist propaganda. But it has to be admitted that God had to create a lot of light already in transit to make it look like it was that old.
.

Comments:
But it has to be admitted that God had to create a lot of light already in transit to make it look like it was that old.You know, God - he's always been a prankster.

Rumor has it he was kidding about hell, too.