Not All Oldies Are Goodies 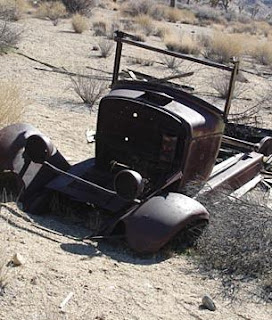 Intelligent Design advocates like to pretend that ID is "cutting edge" science, while "Darwinism" is worn out 19th Century thinking. It doesn't take much digging into ID, however, to realize that it is based on William Paley's watch analogy, merely dressed up in new clothes, and that even Michael Behe's "irreducible complexity" was already an old idea, argued by Georges Cuvier, when Darwin penned the Origin. However, Elliot Sober in his book, Evidence and Evolution, points out that Behe cribbed his notion of IC right out of Paley:

IN crossing a heath, suppose I pitched my foot against a stone, and were asked how the stone came to be there; I might possibly answer, that, for any thing I knew to the contrary, it had lain there for ever: nor would it perhaps be very easy to show the absurdity of this answer. But suppose I had found a watch upon the ground, and it should be inquired how the watch happened to be in that place; I should hardly think of the answer which I had before given, that, for any thing I knew, the watch might have always been there. Yet why should not this answer serve for the watch as well as for the stone? why is it not as admissible in the second case, as in the first? For this reason, and for no other, viz. that, when we come to inspect the watch, we perceive (what we could not discover in the stone) that its several parts are framed and put together for a purpose, e.g. that they are so formed and adjusted as to produce motion, and that motion so regulated as to point out the hour of the day; that, if the different parts had been differently shaped from what they are, of a different size from what they are, or placed after any other manner, or in any other order, than that in which they are placed, either no motion at all would have been carried on in the machine, or none which would have answered the use that is now served by it.

How is Behe's framework related to Paley's? Behe says that an irreducibly complex system is a single system composed of several well matched interacting parts that contribute to the basic function, wherein the removal of any one of the parts causes the system to effectively cease functioning (1996: 39)." Behe's notion of irreducible complexity is very close to the concepts of usefulness and intolerance that Paley (1802) described. Both require that the system have a function or purpose or that it be useful. However, there is a modest difference between Paley and Behe that concerns how they spell out the second requirement. Behe asks whether removing any part would result in the system's malfunctioning, whereas Paley asks whether changing the shape, size, or placement of any part would do so.

Comments:
It always struck me as odd that surrounding Paley's argument from design was an entirely naturalistic wrapper: "that, for any thing I knew to the contrary, it had lain there for ever: nor would it perhaps be very easy to show the absurdity of this answer".

To my mind it seems that Paley was making a point in the context of the opinions of his time, that inanimate natural objects (stones, rocks, water etc.) were categorically different from animate (proved by inferred design) objects.

This does tend to undermine the ubiquity of design as an explanatory theory for what we see. Presumably most Creationists believe that God created everything, so why don't we see design in a pebble?

The Wikipedia article on "Irreducible complexity" has a long line of "Forerunners" to the concept. Paley is rather late to it.

What I find interesting is how many different conclusions one can draw from that concept. The finite age of the universe. Evolution.

[I]t is worth revisiting what [Paley] says about his first example: the stone found on the heath. He introduces this example only to brush past it dismissively; perhaps, he says, "it had lain there forever; nor would it, perhaps, be very easy to show the absurdity of this answer." The stone, unlike the watch and the eye, does not provide a compelling argument for intelligent design. But why not? ...

Although restricting our evidence about the eye and the watch to the conjunction "useful and intolerant" and restricting our description of the stone to the negation of that conjunction makes everything fall into place, the situation becomes less tidy once we recognize that we know more about all three objects. It then emerges that my objection to what Paley says about the eye also applies to what he says about the stone. If the stone's specific features do not favor intelligent design over chance, this must mean, within the likelihood framework, that

The trick here is, I think, that Paley and the IDers know that they don't have to prove that everything is designed by God in order to achieve their apologetic result. Indeed, if they can prove that God designed only one thing, that would prove the existence of God, which is their real intent. The faithful will fill in the rest.

Those are good examples (particularly delicious in the case of the other John Wilkins). I see that Wikipedia doesn't mention that Hume and Kant had demolished the "analogy" of human technology to living organisms well before Paley wrote of it.

Well, la-di-frickin' da. Did Darwin truly have any original ideas that hadn't been expressed by Lucretius and the Epicureans 2000 years previously?

Well, perhaps it is to the legion of Darwinists who can't be bothered to look at any primary ID sources for themselves...

Did Darwin truly have any original ideas that hadn't been expressed by Lucretius and the Epicureans 2000 years previously?

Why, yes he did, which you'd know if you read just about any major work on the history of science.

But you agree that that when the DI claims that modern biologists are pushing 19th century science while they are touting "recent scientific evidence" they're lying?

P.S. When Behe claimed IC was one of the "greatest achievements in the history of science" did he give the credit to Paley (or Cuvier or Wilkins, etc)?

Behe strikes me as one of those people who is so incompetent he doesn't even realize he's failing. Look at the satisfaction which which he viewed his testimony in Dover. Look at his elaborate argument that the malarial plasmodium's flagellum is irreducably complex because it can't form without intraflagellar transport -- which the plasmodium doesn't have!

We should all use the B'rer Rabbit technique and, for all future showdowns, intone "Anybody but Behe! He'll murtilize us!" with as much fake dread as we can muster.