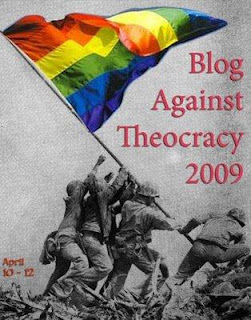 Ed Brayton, at Dispatches From the Culture Wars, takes Maggie Gallagher of National Review to task over her defense of opposition to gay marriage. In particular, Gallagher tries to avoid the comparison between resistance to gay marriage and anti-miscegenation laws:

Same-sex marriage is quite different from bans on interracial marriage in one powerful respect: It asks religious Americans to surrender a core belief -- not only Leviticus (disapproval of gay sexual acts), but Genesis (the idea that God himself made man as male and female and commanded men and women to come together in a special way to image the fruitfulness of God).

Ed rightly points out that no one is being forced to "surrender" anything. Christians of that ilk can go on thinking gays are "icky" and that the pleasant poetry of Genesis is something more than a fable told around the campfires of Bronze Age shepherds. What's more, anti-miscegenation laws were fervently defended as the God-imposed "natural order" of things, including by the judge who sentenced Mildred and Richard Loving, in the case where the Supreme Court belatedly struck down barriers to interracial marriage:

Almighty God created the races white, black, yellow, malay and red, and he placed them on separate continents. And but for the interference with his arrangement there would be no cause for such marriages. The fact that he separated the races shows that he did not intend for the races to mix.

While interracial marriage is the most clearly relevant case to gay marriage, it is hardly alone as an example of "core beliefs" that have been held up as justifications for denying basic rights to others. Here is an example from the Rev. Thornton Stringfellow, in his Scriptural and Statistical Views in Favor of Slavery of 1856:

It is branded by one portion of people, who take their rule of moral rectitude from the Scriptures, as a great sin; nay, the greatest of sins that exist in the nation. And they hold the obligation to exterminate it, to be paramount to all others.

If slavery be thus sinful, it behooves all Christians who are involved in the sin, to repent in dust and ashes, and wash their hands of it, without consulting with flesh and blood. Sin in the sight of God is something which God in his Word makes known to be wrong, either by preceptive prohibition, by principles of moral fitness, or examples of inspired men, contained in the sacred volume. When these furnish no law to condemn human conduct, there is no transgression. Christians should produce a "thus saith the Lord," both for what they condemn as sinful, and for what they approve as lawful, in the sight of heaven.

It is to be hoped, that on a question of such vital importance as this to the peace and safety of our common country, as well as to the welfare of the church, we shall be seen cleaving to the Bible, and taking all our decisions about this matter, from its inspired pages. With men from the North, I have observed for many years a palpable ignorance of the divine will, in reference to the institution of slavery. I have seen but a few who made the Bible their study, that had obtained a knowledge of what it did reveal on this subject. Of late their denunciation of slavery as a sin, is loud and long.

Now, it must be said that many Christians just as fervently opposed slavery on religious grounds -- that's why Stringfellow wrote his book and why the Southern Baptist Convention was formed in the first place -- just as some Christians today support, or at least do not oppose, gay marriage. It is here that I think Gallagher is even more off-base than in what Ed points out. For Gallagher does not merely want to use those allegedly "core beliefs" as a grounds for denying others their rights but as a bludgeon against other Christians:

Many religious people and groups will bow to, if not exactly endorse, the power of gay activists. Witness Rev. Rick Warren, who on Larry King Live this week came very close to recanting his opposition to Prop 8. What he did is what many good people will do in the face of the massive campaign of intimidation and harassment designed to silence Christians and others of goodwill who support marriage: He dodged. Rick said, more or less: I am not now and never have been an anti-gay-marriage "activist."

Let me be clear: I have enormous respect for Rick Warren. What has happened to Rick, who did nothing more than speak from his pulpit to the members of his own church on Prop 8, is what lies in store for many good men and women. The deal they will be offered by the government and the culture dominated by same-sex marriage is: Mute your views on marriage so you may continue your other good works. Many good and brave people, to preserve their ability to save lives in Africa or protect the poor in this country, will take that deal.

I'm not here to criticize him or them, merely to point out the underlying power of the movement than can get a Baptist minister to recant about marriage on national television.

Whether the way Warren went about it was craven or not isn't the issue. If, as Gallagher claims, allowing gays to marry deprives some Christians of the right to exercise their consciences about a "core belief," then continuing the ban is depriving other Christians of the right to their consciences as to what are, in fact, the core beliefs of Christianity. That's why the state should not be in the business of enforcing anyone's religious beliefs: it will inevitably have to take sides in matters of theology. That is a role government and the bureaucrats who run it are singularly unfit to perform, as the Founders of this country foresaw.

Gays are human beings seeking legal relationships between consenting adults, subject to all the limitations and safeguards that apply to heterosexual marriage contracts. Leaving theology out of it, there is no rational reason that they should be treated differently, anymore than interracial couples should have been.

That should be the end of it as far as government is concerned.

Finally, in the spirit of this blog, I cannot help pointing out what may be one of the most amusing Freudian usages that I've seen in a long time. Gallagher chides the Democratic party for acceding to "its richly endowed base of gay supporters."

Comments:
I think posts such as these should carry a health warning: "Visitors to this blog are advised that reading the opinions discussed in this post may cause a dangerous rise in blood pressure."

I must assume that Maggie Gallagher also supports the stoning to death of adulterers and rebellious children as another of the "core beliefs" of her faith.

She should be aware, however, that one of my "core beliefs" is - to paraphrase the immortal words of the character of "Major Rufus Cobb" in the 1939 movie Jesse James - that:

"If we are ever to have law and order in the West, the first thing we gotta do is take out all the fundies and shoot 'em down like dogs."

Okay, it's not really but there are times when I am sorely tempted.

And, for that matter, what ever happened to "Let he who is without sin ..." as a "core belief"?

I have yet to figure out how allowing gays to be married affects the rights of anyone who isn't gay. You've been no help in that department, JP, which I'd say is a good thing.