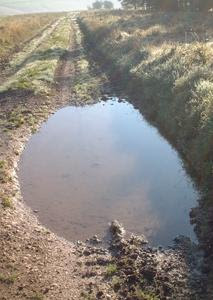 Casey Luskin is a puddle.

Imagine a puddle waking up one morning and thinking, 'This is an interesting world I find myself in, an interesting hole I find myself in, fits me rather neatly, doesn't it? In fact it fits me staggeringly well, must have been made to have me in it!' This is such a powerful idea that as the sun rises in the sky and the air heats up and as, gradually, the puddle gets smaller and smaller, it's still frantically hanging on to the notion that everything's going to be alright, because this world was meant to have him in it, was built to have him in it; so the moment he disappears catches him rather by surprise. I think this may be something we need to be on the watch out for.

But he is a particularly unimaginative puddle because he not only thinks his hole fits him nicely but he thinks when he and his fellow puddles squirm about to get more comfortable, that's proof positive that the hole was made for him by someone else.

This time Casey is going on about biomimicry ... the copying of nature to create nanomaterials, nanodevices and processes. He cites to Bharat Bhushan's article (abstract) in the Philosophical Transactions of the Royal Society and says:

Why should biomaterials have so many different functions, ranging from, in Bhushan's words, "Molecular-scale devices, superhydrophobicity, self-cleaning, drag reduction in fluid flow, energy conversion and conservation, high adhesion, reversible adhesion, aerodynamic lift, materials and fibres with high mechanical strength, biological self-assembly, antireflection, structural coloration, thermal insulation, self-healing and sensoryaid mechanisms"? Why are such structures "commonly found"? Sure, natural selection preserves them due to the important functional roles they play in biology. But to arise in the first place, these structures must become encoded by the information carrying molecule, DNA, and then there must be a mechanism to transcribe and translate that information into proteins. These proteins that form the structures are generated through an information processing system built upon a computer-like language of commands and codes. These encoded biological structures prove useful in human-designed technology precisely because they themselves are a form of intelligently designed technology. [Emphasis in original]

We have already seen that Casey's "computer-like" is a sham based on equivocation. The alternative to his "intelligently designed technology" is that we are trying to use our technology to solve problems that nature has been working at, through trial and error with the best solutions adopted by natural selection, for 3.8 billion years and we are well advised to copy those solutions.

We are all puddles ... it's just that some of us are aware enough -- through science -- of our surroundings that we realize that fact.
.
Link - Posted by John Pieret @ 7:27 AM

Comments:
The puddle argument is a great one - until you assume that the puddle is aware or "conscious" (as Adams does). That seems to make all the difference in the world. Then, inevitably, the puddle will ponder why it finds itself existing in the first person as this particular puddle, instead of the one two meters down the road ;)