It's a Mann's World 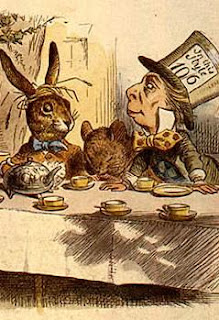 I have been having a spiritual Mannifestation.

The signs are eerie. Words and concepts change meanings without rhyme or reason and without warning -- "science" becomes "secularism;" "secularism" transmutes into "worldview;" "methodological naturalism" morphs into "philosophical naturalism;" "supernatural causation" mutates into "scientific explanation;" and, most of all, "separation of church and state" transfigures into "allowing Christians a level playing field to teach their theology as science."

In other words, Daniel Mann has been haunting the comment thread of a post while the rest of my ... um ... select group of readers have moved on.

This is not just an attempt to nudge some readers to revisit the thread and assist in steadying the weirdly shifting ground that comes with a Mannifestation. It comes to the fore also because of a Letter to the Editor I found from the Argus (South Dakota) Leader. The letter begins:

Naturalism can be defined as the doctrine that the universe can be understood in scientific terms without recourse to spiritual or supernatural explanations. This is the religious belief that is taught in our classrooms.

It can be classified as a religious belief since it cannot be proven but must be accepted by faith. Did you notice the inconsistency in Perry Killion's letter in the Aug. 2 Argus Leader when he did not object to this infliction of religious belief upon students but strongly objects to presenting any other religious belief such as intelligent design in the classroom?

And [Michael] Ruse, who seems to pride himself on his sophisticated knowledge of theology, runs completely aground when he equates teaching Darwinism with teaching atheism. I don't know of a single evolutionist who teaches atheism in their classrooms, or who even says in the classroom that Darwinism is tantamount to atheism. Show me, Dr. Ruse, one atheist who violates freedom of religion by saying, "God does not exist" in the public school (or even the university) classroom. Yes, teaching evolution may have the side result of eroding some peoples' faith, but, as I've pointed out before, the erosion of faith can occur in the geology classroom, the astronomy classroom, the ethics classroom, and even in the theology classroom! (How many believers have lost their faith when learning about how the Bible was actually put together?) As the respect for rational discourse increases, as it should with a good education, the respect for religion will erode. But that doesn't mean that a good education violates the First Amendment.

What is more interesting, though, is that both the letter writer and Mr. Mann implicitly assume that, if government is "secular" (i.e. not overtly or specifically religious), and does not teach that their religious beliefs are true, it amounts to teaching an opposing religion. The mere failure to proselytize their religion is proselytizing another religion. To not openly manifest faith is to openly manifest faith.

It is a strange and topsy-turvy world some people live in.
.
Link - Posted by John Pieret @ 9:22 AM

Comments:
I'm actually glad to see this about Coyne. Recognizing the line between what you personally believe and what should be taught in public schools as science is one of the things I've been concerned about with the NAs.

I don't know how representative that feeling is beyond Coyne, though. Certainly some commentors in other places seem not to have a problem with crossing that line.

`When I use a word,' Humpty Dumpty said, in rather a scornful tone, `it means just what I choose it to mean -- neither more nor less.'

Yes, "methodological naturalism" is entailed in a red herring, but it was one of Phillip Johnson's making. MN was specifically coined in response to his claim that science, as practiced, is inherently "materialistic" because it insists on restricting itself to "natural" causes and unfairly excludes "supernatural causes" a priori." This is complicated by the fact that what we call "natural causes" are simply those things that occur on such regularity that they appear to act in a "law like" fashion (if there is any other definition of "natural," I'm unaware of it) -- which, in turn, permits the induction that is central to science. Moreover, it is true that these "laws" can be, as Mann says in one of his many shifting grounds for supporting ID, that these laws could be, as Darwin himself discussed, "secondary causes" originally set up by God. In which case, however, it is superfluous (to science) to appeal to God because the subject of science is the "laws" themselves, and what use we can put them to, not the metaphysical question of where they came from, which is properly the subject of philosophy/theology.

The problem, then, was to explain, in philosophical terms (which Johnson cast the issue in originally), to people unsophisticated in either the scientific method or philosophy, the insistence of scientists that only "natural causes" will be considered within scientific explanations and to distinguish that insistence from metaphysical naturalism or materialism.

It's true that MN is a bit backwards as a philosophical proposition, in that it is not the proposition of MN that dictates scientific practice. Instead, MN falls out of the practice of science and its insistence on empiric testing. Still, as a shorthand to help elucidate the full argument, I think it is useful.

I can see the dialectical appeal of the notion as a response to Johnson, but as a free-standing notion, I can see all sorts of problems with it.

You're right to say that methodological naturalism is a description of what good scientists generally do, but I worry that it has been turned around and cast as an a priori and thus empirically ungrounded commitment. One sees that move being made quite frequently at Uncommon Descent and elsewhere on the Intertubes.

... but I worry that it has been turned around and cast as an a priori and thus empirically ungrounded commitment. One sees that move being made quite frequently at Uncommon Descent and elsewhere on the Intertubes.

Yeah, Mann did it too. It is hardly a surprise that they'd do it, since that is exactly what Johnson did in the first place. What's the saying? There is no lock that a human can devise that another human can't pick.

Still, they are forced to start from a different place (MN rather than materialism) and the uncommitted may be more likely to see the reasonableness of a limitation based on a practical self-limitation rather than one (alleged to be) based on a metaphysical committment.