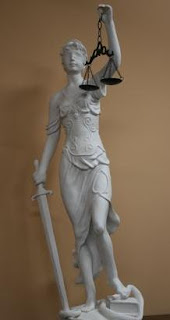 The Ninth Circuit Court of Appeals, widely viewed as the most liberal in the country, has denied Michael Newdow's latest challenge to "under God" in the Pledge of Allegiance (as well as "in God we trust" on US currency). Be warned, the decision is 193 pages long. Using some of my expertise in reading legal decisions, the heart of the decision about the Pledge resides in the following (I will be omitting references throughout). For quick review, remind yourself about the "Lemon test."

Each school shall conduct patriotic exercises daily. At elementary schools, such exercises shall be conducted at the beginning of each school day. The Pledge of Allegiance to the flag will fulfill this requirement. Individuals may choose not to participate in the flag salute for personal reasons.

All parties agree that the "ostensible and predominant" purpose of both California Education Code ... and the School District's Policy is patriotic. ... [B]oth express a secular purpose: to encourage the performance of patriotic exercises in public school. Not only does the plain wording provide for the students to begin the day with a "patriotic exercise", but it does not mandate the text of the Pledge or any other patriotic exercise. ...

Lemon's second prong is also met. The effect of California Education Code ... and the School District's Policy is stated quite clearly in each: each school shall conduct "appropriate patriotic exercises" daily. There is no mention of anything religious in either. Further, although the recitation of the Pledge "shall satisfy" this requirement, it is not mandated under California law. ...

[W]e turn to the hotly contested issue in this case, whether Congress' purpose in enacting the Pledge of Allegiance was predominantly patriotic or religious. ...

When it comes to testing whether words and actions are violative of the Establishment Clause, context is determinative. The dissent analyzes only the words "under God", instead of analyzing the context in which those words appear. The Supreme Court has specifically rejected such a limited analysis ...

The Supreme Court has held prayers, invocations and other overtly religious activities in public school violate the Establishment Clause. ...

All of the religious exercises invalidated in those cases shared a fundamental characteristic absent from the recitation of the Pledge: the exercise, observance, classroom lecture, or activity was predominantly religious in nature—a prayer, invocation, petition, or a lecture about "creation science. ...

The purpose of public prayer is always active—to invite divine intercession, to express personal gratitude, to ask forgiveness, etc. On the other hand, the recitation of "one Nation under God" is a description of the Republic rather than an expression of the speaker's particular theological beliefs, a recognition of the historical principles of governance, affected by religious belief, embedded in the Pledge. "[Our] institutions presuppose a Supreme Being. ...

The dissent states that the mere recitation of "under God" in the Pledge is an affirmation that God exists: it " 'requires affirmation of a belief and an attitude of mind' to which [the infant plaintiff] does not subscribe: a belief that God exists and is watching over our nation." ...

If in fact the students were required to say the Pledge, the dissent would have a valid point. But the California legislature has already taken this consideration into account by allowing anyone not to say the Pledge, or hear the Pledge said, for any personal reason. What is at issue is not saying the Pledge or affirming a belief in God. What is at issue is whether [the infant plaintiff] can prevent other students, who have no such objection, from saying the Pledge.

Obviously, I have not fully (or anything close to it) analyzed a 193 page decision and dissent in the time since I found it tonight. I can see obvious objections -- why should we expect children to be able to assert their right to constitutional protection from religious coercion when we don't expect them to be able to vote, drink, enter into contracts and so many other voluntary exercises of their rights? -- is a big one.

I'm not sure that expressions of "public piety" rise to the level of constitutional violations of the freedom of/from religion clause of the Bill of Rights, but from what I read so far, I'm not convinced of the opposite either.
.
Link - Posted by John Pieret @ 10:48 PM

Comments:
I get the impression that in many similar cases, the courts are avoiding calling things religious which appear to be religious by saying that they are meaningless.

Like saying that Christmas is largely a way of boosting sales.

Like saying that Christmas is largely a way of boosting sales.

Ain't it? Is that supposed to be controversial?

What purpose does a daily act of patriotism serve? Do you love your wife any less because you don't recite your marriage vows on a daily basis?

That aside, when my daughter was attending middle and high school she, and her peeps, would recite Bellamy's pledge as he wanted it:

"I pledge allegiance to my flag and to the Republic for which it stands, one nation, indivisible, with equality, liberty and justice for all."

... with equality, liberty and justice for all

A noble sentiment but never true about the US. Is swearing to a noble lie patriotism?

A noble sentiment but never true about the US. Is swearing to a noble lie patriotism?

The US can hardly be said to be "one nation, indivisible". This was even less true in Bellamy's day and, I believe, he wrote his pledge as an aspiration rather than a description. As for "equality"...if Bellamy's boss hadn't been such misogynist and racist it would have been in!

I'd like to reiterate my question: What purpose does this daily act serve?

They hope it will keep the lil' bastards from growing up to be terrorists. Of course, most of 'em will not grow up to be terrorists anyway and the few that will won't be deterred by a bit of piety like the pledge. In a way, it's magical thinking: say it often enough and it'll come true.