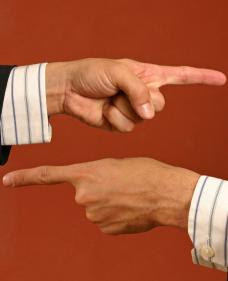 We all "know" that moderate theists "enable" religious extremists.

But they also seem to enable atheists:

First, there are three positions in the creation-evolution debate.

The Christian biblical view is that God created everything in its present form in six days.

The second is the atheists' view that there is no God and everything just happened by chance, including the Big Bang, spontaneous generation of life, and evolution of all species.

The third is the theistic evolution belief, to which Mr. Connelly ascribes, that says there is a God and he caused the Big Bang, spon-taneous generation of life, and evolution of all species.

Theistic evolutionists believe that science has proven a Big Bang and millions of years of evolution. None of this has been proven, and those theories require several assumptions.

They claim to be Christians, as many are, and accept the other miracles in the Bible, but deny the miracle of creation. Why?

There is an enormous amount of evidence supporting creation, a worldwide flood, and a young Earth. Marine fossils that are found near the tops of mountains are a fact.

There are no intermediate species today between humans and any other species. The shrinking sun would have been too big and close millions of years ago.

What is wrong with Christians believing in theistic evolution? They destroy any possibility that the Bible is God's word when the first few lines are claimed to be false.

Christianity has been almost destroyed in Europe. The U.S. has degenerated into a post-Christian nation.

Much of this is because of apathy and the actions of theistic evolutionists who aid atheists in supporting evolution.

Another strange confluence between some atheists and Fundamentalists.
.
Link - Posted by John Pieret @ 9:57 AM

Comments:
Yes, we 'moderate theists' enable everyone. That's why we're getting it from all sides, we get in the way of their attempt to make everything a forced choice.

In my case, my moderate theism consists of accepting science, as far as it goes. My acceptance includes positively revelling in the wonders of evolutionary biology and paleontology.

I don't have time to do more than skim that asktheatheists link, but I detect a common fallacy running through much of these "enabling the extremists" arguments. Yes, I can imagine ways in which the mere existence of a large number of moderates would socially legitimize the existence of an extreme fringe -- but it applies to many other ideological axes as well. All opinions or movements come a range of moderation and extremity, so if Karen Armstrong "enables" Fred Phelps, then so does the NDP enable the Red Brigades, moderate conservatives enable the Randians, and agnostic secularists enable (hypothetical?) radical atheists who want to burn down all the churches and pack their adherents off to re-education camps.

So yes, it may be true as a sociological fact, but in itself it is an illegitimate criticism of moderate religion, unless you're also prepared to criticize those other areas consistently, too.

Note though, that there are versions of the extremist-enabling meme which are not vacuous, eg. if the moderates fail to reasonably dissociate themselves from the crazies, then they are in effect providing a kind of cover for them.