Of Morals, Values and Neither 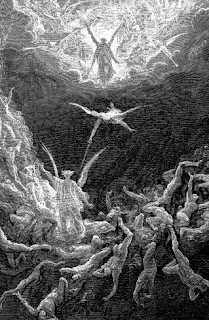 Michael R. Felletter is "a senior majoring in visual journalism" at Penn State University and Multimedia Editor of the student newspaper, The Daily Collegian. In an article entitled "Senior wonders why many look down on Christians," he denies that he, himself, is one but laments a "crazy column about Christianity" without, unfortunately, linking to it. Given his own screed, it might well have been worth reading.

You see, he thinks the following are examples of Christians being "particularly harassed for their faith":

In public schools and government offices, there is a fierce battle taking place to remove any Christian references under the premise that it is unconstitutional.

I don't object to there being a separation of chuch and state, but at what cost? Is that separation even mentioned in the Constitution?

Read it for yourself and let me know.

On the other hand, our government has been accommodating other religions such as Islam. In two school districts in California and Texas, special rooms for Muslim students to pray in on Fridays for Jum'ah have been integrated into the schools, where they are excused from class for this hour-long congregational prayer.

In 2004, 11-year-old Nashala Hearn was suspended twice in the Muskogee Public School District in Oklahoma for refusing to remove her headscarf under the dress code policy. Hearn won in a settlement, and changes were made to the policy adhering to the Islam faith.

Why, yes, it is in the Constitution, right there in the First Amendment (as applied to state and local governments by the Fourteenth Amendment): "Congress shall make no law respecting an establishment of religion, or prohibiting the free exercise thereof ..."

In short, government cannot coerce anyone to accept any particular religious practice or religion in general. You cannot have freedom of religion if you cannot reject it altogether. Thus, public schools cannot force students to pray or acknowledge a particular God and cannot express, by word or deed, a preference for a particular flavor of religion.

Thus, Mr. Felletter is wrong when he says "Christians are being prevented from freely practicing their faith in public schools, while Muslims are gaining ground," except in the trivial sense that Muslims are "gaining ground" by being allowed the same rights as Christian students.

If atheism is the way, who has the authority to make the laws. Without religion, where do we find our morals and values? In the government, where the majority makes the laws?

Let's look at this scenario: It's late at night, and there are two routes home. The first is a Christian neighborhood. The second is atheist. Which one would you feel safer passing through? I'll let you make that decision yourself.

Want to ask a Muslim or a Jew that question or, for that matter, a black or Hispanic Christian walking through a white Christian neighborhood? Which is not to say that atheists are more moral than religionists ... just that they are certainly no less moral.

And, yes, it is the majority, within the restraints imposed by the Constitution to protect the rights of the minority, who makes the decisions as to what civil morality and values will be enforced by the state. Who else in a democracy? As for the personal morality and values of people, those should be the decision of the individual. That’s what freedom of religion is all about.

But this is the kicker (and what got my attention):

The theory of evolution is taught in school as fact, though it is full of holes, just like the Christians' Bible. Aren't they both a belief system? Don't both need faith to believe in them?

I’m going to hazard a guess that Mr. Felletter is the product of a school system where Christians were in control of what got taught and their vaunted “morals and values” not only allowed, but compelled them, to have lies about the science of evolution foisted on innocent children.
.
Link - Posted by John Pieret @ 12:49 PM

Comments:
If it were up to me, I'd have entitled the article "Senior makes you wonder what kind of academic standards they have at Penn State". Anyone professing belief in the 'Christians are persecuted in America' meme is either dishonest or a prize dolt (I am agnostic on the question of whether the condition of dolt is congenital or chosen in this case).

I hope he was at Penn State on a football scholarship.

Maybe he played too many games without a helmet.