Running Out of Fingers 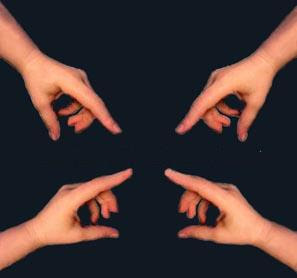 Via John Wilkins (via Jason Brown, via Dave The Happy Singer and who knows who else) there is a list of the "someone else to blame" for priestly child abuse so far accumulated by the present band of merry moralists in charge of the Catholic Church:

And from the comments at John's place:

And in a not-totally-fair-to-tar-the-church-leaders-with-loons, we can include the craziness of William Donahue of The Catholic League:

The fight against wasteful bureaucracy

Comments:
It really is beyond a joke, isn't it?

Thanks for the indirect plug of the Catholic Blame Game!

I've bookmarked your extra suggestions to feed into the site soon, with a few other ones also still to come.

Can anybody buy these guys a mirror?

They'd only use it to adjust their dresses.

I don't know why anybody hasn't blamed Darwin.

Didn't it all start after the RC's endorsed Darwinism?

Thanks for the indirect plug of the Catholic Blame Game!

Sorry, I should have given a link to your site. Keep up the good work.

I don't know why anybody hasn't blamed Darwin.

First they have to figure out a way to blame Hitler and then they can blame Darwin.

Blame free will. Only religious people have it and I'm sure that catholic priests have more than most. And then blame confession and forgiveness.

Surely if God is omnipotent then He is ultimately to blame?

And yes this is a reprise of the question "How can a good god permit evil?"