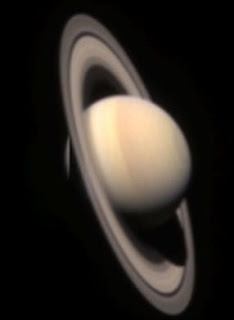 Ed Brayton points out the hypocrisy of Intelligent Design advocates when they "claim that ID is not religious, but if anyone is not allowed to advocate for it then they are being discriminated on the basis of religion."

The latest is the case of David Coppedge, an IT employee who has worked on Jet Propulsion Laboratory's Cassini mission since 1997, who was allegedly demoted for promoting his religion by talking about intelligent design with his coworkers and giving them ID videos.

The complaint states that Coppedge is the victim of religious discrimination and retaliation under California's Fair Employment and Housing Act.

The ever ridiculous Casey Luskin ties himself in knots trying to avoid the obvious:

"Intelligent design is not religion, and nothing in the DVDs that Coppedge shared deals with religion," noted Luskin. "Even so, it's unlawful for an employer to discriminate against an employee based on what they deem is religion."

Another posting at the Discoveryless Institute's Ministry of Misinformation calls the suit the "Intelligent Design Discrimination Lawsuit Against NASA's JPL," as if there is any law against discriminating against a "scientific theory."

I'm not so sure Ed is right on this point:

Let me say this up front: I don't know the facts of this case. I certainly don't trust the DI, which has been flagrantly lying about alleged discrimination cases against Sternberg and many others -- anything to create a false martyr -- since years. But if that accusation is true, if David Coppedge really can show he was demoted because he gave out some pro-ID information to co-workers, Coppedge should win the case.

Ed's right that we don't know enough at this point to answer the question but the determination will be more complicated than what Ed suggests. The JPL is a Federally funded part of NASA and, presumably, Coppedge is a Federal employee (or the equivalent of one). Under the Supreme Court case of Pickering v. Board of Educ., 391 U.S. 563, 568, 88 S.Ct. 1731, 20 L.Ed.2d 811 (1968) and its progeny, a balancing test applies to the freedom of speech claims of government employees. To boil that test down to the parts that may apply in this case, I'll quote from Lewis v. Cowen, 165 F.3d 154 (2nd Cir. 1999) (citations and internal quotation marks omitted):

In balancing these interests, a court must consider whether the statement sought to be protected impairs discipline by superiors or harmony among co-workers, has a detrimental impact on close working relationships ... or impedes the performance of the speaker's duties or interferes with the regular operation of the enterprise.

The "manner, time, and place" in which the speech occurs is important in determining whether it is protected. For example, the Pickering balance is more likely to favor the government when an employee directly confronts his supervisor with objectionable language than when an employee engages in equivalent speech on his own time and not in front of co-workers. ...

The Supreme Court also has explained that regardless of the content of the speech, the responsibilities of the employee, or the context in which the speech was made, an employer is never required to allow events to unfold to the extent that the disruption of the office and the destruction of working relationships is manifest before taking action. The State need show only a "likely interference" with its operations, and not an actual disruption. [The] Court gives substantial weight to government employers' reasonable predictions of disruption caused by employee speech.

However, even if the Pickering balance is resolved in the employer's favor, the employee may still demonstrate liability by proving that the employer disciplined the employee in retaliation for the speech, rather than out of fear of the disruption.

If Coppedge's proselytizing was being done during work hours (particularly if he was using his position as a leader on the system administrator team to facilitate it) and causing complaints from other employees, the JPL would be within its rights to tell him to knock it off. And if he failed to do so, it could discipline him.

"Coppedge sits on the board of directors of Illustra Media, the group that publishes the DVDs that he distributed to JPL employees, including "Unlocking the Mystery of Life" and "The Privileged Planet," according to Becker."

Does it make a difference that the DVDs he gave to his coworkers were from a company he's involved with?

It might, if he was trying to sell them. Commercial speech is less protected than political and religious speech. An employer could almost certainly stop an employee from selling, say, Avon products at work.