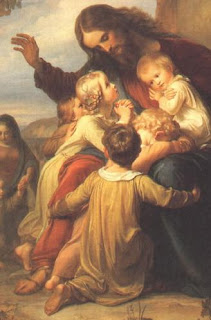 James McGrath, associate professor of religion at Butler University, has been after Ken Ham of late, including a funny April Fool's post that, naturally, Ham sees no humor in.

James is quite correct, in my heathen opinion, where he accuses YECs of not treating the Bible literally "when it comes to the Bible's teaching about economic and social justice, concern for the poor and oppressed, renunciation of wealth, and most other matters of practice." I'll leave it up to James' expertise as to whether it is also "anti-Christian" and a "false Gospel."

But in Ham's "response" (as James points out, there no real engagement with James' points) there is, to me at least, a stunning admission by Ham:

I have written many times on this blog over the past few years, and we have stated in many articles in our publications and for our website making it very clear (as I do when I speak at conferences) that the gospel is not conditioned upon the age of the earth. In fact, I am beginning to realize more and more it is not that people misunderstand this about us, but it is people like Dr. McGrath and others like him who continually make this false accusation in their attempts to get people to think incorrectly about what we teach.

The Bible makes it clear (e.g., John 3, where Jesus explains to Nicodemus that a person needs to be "born again," and Romans 10:9 that states, "if you confess with your mouth the Lord Jesus and believe in your heart God has raised him from the dead, you will be saved") that salvation is conditioned upon faith in Christ and not the age of the earth. Though, We do help people understand that the message of the gospel does come from the Bible; thus, the question as to the authority of the Word of God is a very important one. While believing in millions of years doesn't affect a person's salvation directly, there is no doubt that it does affect how others' (e.g., children, students they teach, etc.) view the authority of Scripture. If a person has to reinterpret the clear teaching of Scripture to fit in millions of years (e.g., reinterpreting the days of creation), this clearly undermines the authority of God's Word. As a result, there are increasing numbers of people who then reject the gospel that is dependent on the Word of God being true and authoritative.

First of all, why would anyone think that Ham holds that that the gospel is conditioned upon the age of the earth? ... other than the wrecking ball labeled "Millions of Years" destroying a church at his pseudo-museum, that is?

More importantly, Ham all but admits that he knows that what he is teaching is false -- or, at least, that he has reckless disregard for its truth -- and that the only thing that is important to him is keeping children and others who are ignorant from questioning the Bible in any way, even though he concedes that is not a prerequisite of salvation. It has a lot in common with Irving Kristol's famous diktat:

I've heard of "Suffer the little children to come unto me" but I missed the part that said "and lie to them for their own good."
.
Link - Posted by John Pieret @ 9:55 PM

Comments:
I take a back seat to no one in my disdain for the Hamster, but in this case I'm not seeing it. Speaking as an "ex", I can say that there is a general consensus in Evangelicaldom that the only requirement for salvation is "faith in Christ" (defined roughly as: at least a moderately orthodox Christology, and a personal commitment to piety and obedience). Erroneous views on other doctrines (eg. creationism. literalism in general, church governance, liturgy, baptismal practices, etc.) are not automatic disqualifiers for Heaven.

However, unorthodoxy is likely to impair one's spiritual progress, and even make one vulnerable to backsliding or apostasy -- hence, the Creation Funhouse's hand-wringing about "Millions of Years", the invocation of Charles Templeton as a cautionary tale, etc. There is a definite tendency to see evangelicals who happen to differ from you over your pet doctrine as being spiritually inferior -- but not to the point of anathematizing them.

One could argue that the amount of noise AiG makes about creationism obscures the subtlety of their actual position, but I don't think there is a contradiction in their stance.

There is a definite tendency to see evangelicals who happen to differ from you over your pet doctrine as being spiritually inferior -- but not to the point of anathematizing them.

No, I agree that that part of it isn't contradictory ... in fact, I found lots of places where they say pretty much the same thing. But the wrecking ball is an example of why someone would think that Ham holds that that the gospel is conditioned upon the age of the Earth.

What struck me was Ham wasn't concerned about the people at risk of backsliding or apostasy but on what effect even admitting there was a question of what to believe about the age of the Earth would have on children. Ham admits that there is a way to approach the Bible that results in salvation but doesn't want that to get through to children. At the very least, that is reckless indifference to the truth.