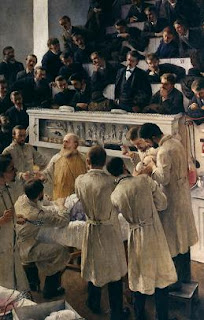 There is one thing about my wife's recent illness and death that I want to discuss publicly, perhaps appropriately on Memorial Day.

That is the disposition of her body. Having a year to consider it, I think we came up with the best possible solution.

Neither of us had ever liked the ghoulish practice of wakes, especially since modern medicine makes it all but inconceivable that anyone will be pronounced dead in error, notwithstanding fantastic tales to the contrary, and never after embalming in any case. Shirley originally expressed a desire to donate her body parts but, given that she was suffering from widespread malignant cancer, there would be no chance that her body parts would be accepted for transplant. We considered cremation, but that failed to bring any, even small, good out of her suffering and death.

We finally hit on donation of her body to a medical school. The process was exceedingly easy. The medical school (in this case, Stony Brook University Medical School), has its own funeral home to pick up the body and do the paperwork. The service is available 24 hours a day, inasmuch as the school wants the body as soon as possible after death, since they don't want it embalmed. They came and removed her body from the friend's home where she had been staying in her last days (another story altogether) in the wee morning hours of New Years Day.

Once the school is finished with the body, the remains are cremated and the ashes either returned to the family or, if the family chooses, are simply scattered over the ocean. A minor consideration was that there is no cost to the family, though they did request that we donate the Social Security death benefit of $250 to the school, which I was happy to do. I received a nice letter from the head of the school explaining the good that the donation might do, both in the training of future doctors and in the biological investigations to be done. Who knows, maybe she'll even attain a kind of HeLa immortality.

Comments:
Nice call,it's what I'm planning for myself.

I can't imagine your loss.

However, that sounds like my plan...donate first. If that falls through then medical school. I've spoken to Yale-New Haven and they seem quite amenable. I also tried the Virginia Body Farm, but they wanted the expense of transport to come out of the estate.

Thank you for posting this, and for your wife and you deciding to do this. This is not something a lot of people consider, but it is something that will do enormous good.