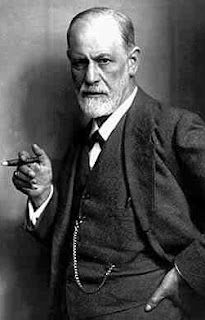 Josh Rosenau points to a post at the Ministry of Misinformation by Jay Richards that, once again, belies the claim that ID has nothing to do with religion. Of course, Richards is still waiving around the fig leaf that ID doesn't claim that the "Designer" is God but there is an interesting amount of slip peeping out of Richard's skirts:

Anyone who is aquatinted with Wilkins' epistemological hat or even Meyer's mealy-mouthed invocation of extraterrestrial "Designer(s)" knows that it is "divine causality" that ID evokes and even Richards can't keep the story straight.

Reading this, however, it occurs to me that there is a good explanation of why ID is not science.

As we all know, a central argument in ID is that DNA is like computer software or a code and, since the only examples of software or code that we are aware of are created by an intelligent agent -- humans -- it is "reasonable" to infer that DNA is also designed by an intelligent agent. IDers, however, as Richards notes, refuse to engage in "specifying how the design is implemented, or by whom." Indeed, they (not so strangely) refuse to address "religious questions about the identity or metaphysical nature of the designer."

Let's look at another example: we know that radio signals can be created by intelligent agents like humans. If we then listen and discover radio signals coming from outside the Earth and we refuse to consider who or what might have caused those signals or how they were created, we'd might argue that the "best explanation" was to infer that all the radio signals were the result of intelligent agents. Of course, we have good explanations of other sources of radio signals -- just as we have good explanations of adaptation and the "apparent design" of life -- but if you insist on squeezing your eyes tight shut and burying your fingers knuckle deep in your ears and refuse to even consider the source of those extraterrestrial radio signals, it's easy enough to "conclude" they are intelligently designed.

That would be just as "scientific" as ID is.

Labels: Designer As God, ID Not Religious, Matheson on ID

Comments:
And if we detected radio signals that were apparently generated by intelligences, there would be a stampede of scientists into a cottage industry directed at figuring out what sort of agents produced them, doing content analyses and other analyses in an attempt to ascertain the properties of the agents. In contrast, the IDists purport to find 'design' in biological systems and show no apparent scientific interest in what those systems can tell us about the purported designer(s), claiming, as Dembsi does, that the identity (and, mutatis mutandis presumably the properties) of the designing and manufacturing agent(s) are outside the purview of science.

Ah, but as soon as you start to work on the nature and characteristics of 'the designer' you then face the question of who designed the designer.

The question upsets the religious who start muttering about 'the uncaused cause' and 'existing outside time', yadda, yadda ,yadda, but people who assert ID seem unwilling to detect intelligent design of the intelligent designer.

Not very convincing is it?