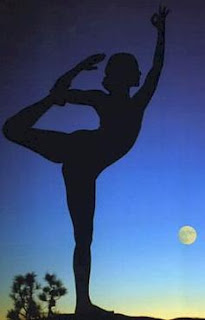 It has become such a delicate thing!

Practically anything can destroy the faith handed down by the martyrs who suffered such gruesome fates.

Like sitting in the lotus position ... even if you are saying Christian prayers while doing so:

[A] Florida class combining yoga and Pilates with Christian prayer and meditation steers clear of yoga's Hindu roots and seeks to show that Christian faith is compatible with the ancient form of movement and relaxation.

The class, called Praisemoves, is sponsored by Community of Hope, a non-denominational evangelical church in Loxahatchee, Fla.

It begins with a prayer thanking the Lord for bringing the group together. Participants proceed through a series of Sun Salutations, strength and balance poses, twists and Pilates exercises.

The class ends with meditation on a New Testament passage, such as 2 Corinthians 12:9: "And he said unto me, 'My grace is sufficient for thee: for my strength is made perfect in weakness. Most gladly therefore will I rather glory in my infirmities, that the power of Christ may rest upon me.'"

But, of course, that's not good enough for some people:

"It's a spiritual discipline for an Eastern religion," he says. "It's important for Christians not to put themselves in that world." ...

About half of American yoga students practice the poses to improve their health, according to the Yoga Journal study. They are not practicing true yoga, which is an all-consuming spiritual path, says Robert Bowman, director of research for the Institute for Religious Research, a Christian organization that studies religious claims.

"The concern I have as a Christian is for many people this is Hinduism-lite, an entree into alternative spiritualities that are packaged in a way that is not overtly religious," he says.

Naturally, it is quite all right to package creationism in a way that is not overtly religious and try to get it taught at taxpayer expense.

Comments:
I think you need to watch this: http://www.youtube.com/watch?v=cAyqaLpJTQg A beautiful demonstration of Christian yoga! :)

Wow. Guess they'd best stop celebrating Christmas and Easter, then, cuz of all those pagan religious thingies that will totally lead them down the slippery slope to heresy and all that.

These folks are just so sad....

"You can't take yoga out of its historical context and neuter it,"

Why the heck not? Is there a law or something?

Ah, he must have "researched" it. That's how he got his conclusion that you can't take yoga out of its historical context and neuter it. He must have done a lot of "research" or something.

With a name like "Christian Research Institute", you just know they must be really good "researchers".

With a name like "Christian Research Institute", you just know they must be really good "researchers".

That's actually the organization ot "The Bible Answer Man," Hank Hanegraaff. On occasion he can come close to being reasonable when it comes to things like the "Word Faith" movement but when the subject is evolution or the otherwise innocent adoption of things like yoga, he's as crazed as the rest.

This particular branch of Christian Fundamentalism pops up in a lot of places and is always perplexing.

These people (the ones objecting to yoga) seem like the same kind of people who believe in the "war on Christmas," that anything not referencing Jesus secularizes and perverts the original meaning. Yet at the same time will protest the celebration of Halloween, because of its original meaning, and despite the fact that by their standards it has been secularized and perverted beyond recognition.

It's a double standard that can only be resolved one way: they are puritans who want everything around them to be just as strict and rigid as they are.