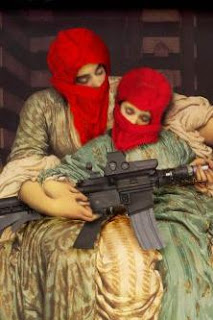 The latest batch of curriculum revisions out of Texas will be "current" for 10 years.

They include teaching only creationism as an explanation of humans on Earth, raising Phyllis Schlafly of the Moral Majority to the historical equal of Thomas Jefferson, and ridding textbooks of the terms "capitalism" and "democracy" in favor of "free enterprise" and "republic." ...

Terrorists celebrate 'til the early hours when our schools succumb to pressures to teach a singular theory.

When school districts modify their curriculum to allow just creationism or just evolution to be taught, there is dancing in the terrorist streets.

They don't even care which one is taught as long as the other point of view is totally ignored.

That is their way and the path they want followed worldwide.

They survive solely because they preach that there is one cause, one religion, one way and only one way to embrace each and every issue.

Tolerance is not in their vocabulary.

If terrorists can point to American students learning from curricula touting singular versions of human life, editorialized American history, and revised economics, much of our strongest weapon ...

We must vigorously teach school kids to value all sides of issues before making up their minds.

While substituting "free enterprise" for "capitalism" and "republic" for "democracy" is silly, I was unaware that Schlafly was substituted for Jefferson ... it was Thomas Aquinas and/or John Calvin, I believe. But even the Texas neo-theocrats couldn't manage to excise evolution from the science standards.

Even more bizarre is the claim that teaching only evolution in science classes in public schools is what terrorists want. What they really want is an end to American religious and other freedoms. That is what is attractive to people around the world and anathema to the systems favored by terrorists.

Parents and pastors are free to teach children religious views of the world but our government must stay out of that arena. It is that attitude that will drive the terrorists to distraction.
.
Link - Posted by John Pieret @ 10:37 PM

Comments:
Maybe, in order to be fair (and balanced?), they should teach the terrorist view of America too. Teach the controversy and all that.

And have heads exploding all across Texas?