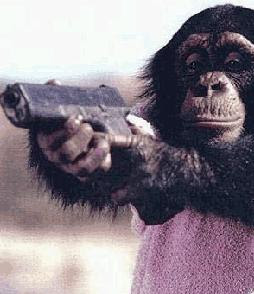 New Scientist has an article on "warfare" between chimp troops:

A bloody 10-year dispute in the Ugandan jungle ended in mid-2009 with the victors seizing territory held by the vanquished. The episode represents the first solid evidence that chimpanzees kill their rivals to acquire land, and could help explain the evolutionary origins of some aspects of belligerent as well as cooperative behaviour in humans.

John Mitani, a primatologist at the University of Michigan in Ann Arbor, and his team have observed the Ngogo chimpanzee troop in Uganda's Kibale National Park for over a decade. Between 1999 and 2009, they witnessed 18 lethal attacks led by Ngogo males on another, smaller group of chimps. They also found indirect evidence of another three lethal attacks, making the Ngogo troop one of the most violent groups of chimpanzees so far studied.

With more than 150 individuals, the troop is two or three times as large as other well-studied groups. Superiority in numbers allows it to patrol its territory's hinterlands, where members are likely to encounter smaller, neighbouring troops. "Attacks are made when there's more of us than them," says Mitani.

In mid-2009, his team noticed that the Ngogo chimps had finally seized part of the home range of their rivals, so increasing the size of their territory by 6.4 square kilometres, or 22 per cent. Where only adult males on patrol had previously visited this area, now the team saw them "going in there with females and children and acting and shouting like they would if they were in the middle of their territory", Mitani says. The Ngogo chimps were probably drawn by food: black mulberry trees had begun fruiting in the area around the time of the takeover.

The territorial gain is likely to bring about other advantages. Chimps belonging to troops with large home ranges tend to weigh more than those with less land and their females tend to have more offspring. What's more, territorial gains could draw in females from neighbouring troops, offering more mating opportunities to the males.

Land, food and sex leading to war? Why does that sound familiar?

Mitani warns about making too much of this:

Humans go to war for a variety of reasons ranging from disputes over resources to religion, and such conflicts can often be settled by negotiation. "We might be comparing apples and oranges," he says.

In fact, rather than explaining the evolutionary origins of war, chimpanzee disputes could help explain the evolution of human cooperation. Samuel Bowles at the Santa Fe Institute in New Mexico has used evolutionary models and archaeological evidence to argue that altruism emerged in humans as a result of violent conflicts between groups of people who were willing to die for their comrades and more selfish, individualistic populations – with the altruistic warriors winning out.

But isn't that what the Ngogo were doing? Anyway, the phenomenon is close enough to our own behavior to emphasize chimps' similarity to us in more than physiology.
.
Link - Posted by John Pieret @ 11:00 PM

"But isn't that what the Ngogo were doing?"

Exactly! Our base reasons are probably about the same. We're just able to affix highfalutin rationalizations to them.

BTW, congratulations. You know you've made it when DM starts pestering you.

BTW, congratulations. You know you've made it when DM starts pestering you.

Once again, the more we study, the more links we find between humans and other animals. Some people just can't deal with the fact that homo sapiens is not nearly as special as we like to think we are.

I'm not sure I can recall anyone bragging on our uniqueness on the basis that we go to war. It usually has more to do with our ability to do things like discuss whether or not we are unique in some non-trivial way (it being the glory and despair of biology that every organism is unique).

Now, if 'the Chaplain' is non-human, well then, there goes our uniqueness. Otherwise there's more than a bit of irony in his expressed disdain for the proponents of human uniqueness.

That last 'Anonymous' was me, FWLIIW.

I'm not sure I can recall anyone bragging on our uniqueness on the basis that we go to war.

Ah, but think of all the things that are involved in "war," as opposed to mere chance-initiated aggression. It takes certain planning (such as patroling borders) and judgment (recognizing you outnumber your opponents) and thought for the future (making a good but periodic food source part of your territory and defending it).

Those are all things that humans brag on.