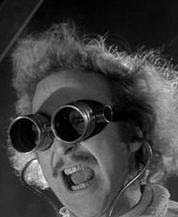 Hey! At least it is something new!

It comes from one Joe Sobran, who calls himself "The Reactionary Utopian," and is associated with something called the Fitzgerald Griffin Foundation.

Sobran starts off with a reasonable enough attack on Dan Brown's The Da Vinci Code, which has about as much to do with history as Perry Mason has to do with the law.

But then he loses it ... spectacularly:

Some of the great frauds of modern history have been perpetrated by highly intelligent men who have appealed to the desire for relief from the unbearable demands of Christianity; and other intelligent men have welcomed their doctrines. ...

Today Marxism has been so falsified by disastrous experience that few still believe in it; but we are finding that Darwin has outlived Marx. Darwinism also appeals to godlessness, but Darwin, in contrast to Marx, didn't make predictions that history could refute in a generation or so. Today, in consequence, the Darwiniacs, as I like to call them, are going strong.

A federal judge named John E. Jones has overjoyed the Darwiniacs by ruling that the teaching of "intelligent design" in public schools, even as an alternative to Darwinian evolutionism, violates the U.S. Constitution. Apart from being legal nonsense, that would outlaw even Aristotelian teleology as "religious." Children must be taught that nature has no purpose, beyond "survival of the fittest" - though even survival is, strictly speaking, an accident rather than a purpose. We owe our existence, our humanity itself, not to anything intelligent, but to the chance mutations of stupid matter.

This is the dogma of Darwinism, which passes for "religious neutrality" (at least among the modern mainstream of the irreligious). As always, liberalism is playing its old game of "Let's compromise my way." The happy medium between theism and atheism is atheism. As long as you don't call it atheism, of course. (You should call it Science.) ...

Why is it so urgent to teach the kids that life is absurd? Are little Darwinists better equipped for survival than little Christians? Is that what the Constitution tells us?

Setting aside the question of Marxism, "Darwinism" did not, in fact, refrain from making "predictions that history could refute." The science of evolution, as expounded by Darwin and generations of scientists since his time have made a plethora of predictions that have been massively confirmed over the last 150 years. That is why, within the scientific community, evolution is all but universally accepted as the best scientific explanation of the structure of life.

Since Judge Jones did not rule that ID or Aristotelian teleology could not be taught as an "alternative" view of the world in public schools, the only "legal nonsense" that is being peddled is Sobran's. What Judge Jones ruled, fully in concert with far more knowledgeable legal authorities than Sobran, namely, the Supreme Court, is that the government cannot dress up religious claims, such as ID, and pretend that they are science.

The main beneficiaries of this separation of church and state are religions themselves. Elsewise, Catholics in local majorities would be able to dress up their doctrines in various disguises and force Protestants to pay taxes to have them taught to the children of Protestants as established fact; Jews could do the same to Christians; Muslims to Jews; and so on and so on. There is nothing, however, to prevent public schools from teaching about ID and/or Aristotelian teleology as alternatives ... except the fact that ID advocates don't want to be just an alternative, in appropriately neutral philosophy or comparative religion classes, they want the government to put its imprimatur on their own sectarian beliefs.

What the Constitution tells us is that children who are taught at taxpayer expense should be educated about the world as free of sectarian religious views about the world as possible. Science, practiced by people of all faiths and no faiths, should be taught as envisioned by the scientific community as a whole. That excludes teaching children that ID, creationism, Christian Science, shamanism, atheism and a slew of other "worldviews" are scientific. Children can and should be taught about those worldviews ... but as precisely that: worldviews.
.
Link - Posted by John Pieret @ 7:50 AM

Comments:
Joe Sobran is a well-known far right crackpot. Expecting him to make sense is like expecting Sarah Palin to make sense.

Unfortunately ... or not ... my knowledge of far right crackpots may be deficient. Thanks for the information/warning.

Sobran has been forgotten by a lot of journalists since he was fired from National Review almost 20 years ago for his attacks on Israel. His superiors, including old WFB, said this amounted to anti-semitism and gave him the pink slip.

But like his friend Tom Bethell, he pretty much lives up to billing when it comes to Shakespeare, Einstein, Darwin...sigh, you name it.