Exorcising All the Wrong Demons 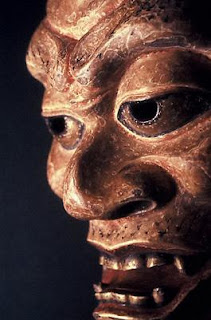 This is oh so sad.

The prophet had come up from Georgia. She stood at the front of the Holy Ghost Temple Church and called for parishioners to come forward. On this Sunday in February, roughly 100 worshippers filled the white-walled Pentecostal sanctuary that sits on a wooded hill beside a BMW dealership. Among them was 20-year-old Kevin Robinson. He stepped out from his pew, walked up the lavender carpet, and joined the line in front of the prophet. He wanted to be prayed over, as is common in the Pentecostal tradition, by this powerful preacher. In the eyes of believers such as Kevin, a prophet speaks the very word of God and can divine the future. ...

"Are you gay?" the prophet asked him.

In a quiet, gentle voice, Kevin acknowledged that he was.

Yes, Kevin repeated, he was gay.

"You need to be delivered from homosexuality," the prophet said into a microphone so that all the church could hear. Kevin was embarrassed, but he stayed put. This was no normal preacher—she spoke God's truth. According to church dogma, homosexuality is a sin foisted on humans by demons who take possession of their bodies and compel them to act against God's will. These evil spirits can be exorcised by those trained in spiritual warfare in a ritual known among Pentecostal Christians as deliverance. Perhaps, Kevin thought, this prophet could finally deliver him from his demons. ...

Kevin closed his eyes, thinking to himself, "There's something wrong with me; I need to change." A part of him believed this prophet could do what no one else had been able to do during previous deliverance attempts—make him heterosexual. But the prophet was loud and she looked at him with disgust and contempt as her chants became more and more belligerent. Even now Kevin can't bring himself to repeat the most hurtful things she said. He soon began to cry. And then, with the prophet still exhorting the demons in him to depart, he blacked out and collapsed. When he regained consciousness, he stood up and returned to his seat. His shame was turning to rage. He searched his mind and thoughts and found he was unchanged—he was still attracted to men. In the past it had been family members—his mother, his aunt, or his uncle, the church's pastor—who performed deliverance on him. This time it was a stranger, and she had pushed him beyond the breaking point. Never again, he decided, would he allow himself to be treated this way.

It was, by Kevin's count, at least the 10th time since he was 16 that he'd subjected himself to gay exorcism.

The story goes on to detail the tribulations of Kevin -- and others -- at the hands of ... there are no other words for it ... religious fanatics, including his own family.

Some slight movement has been shown by his mother:

Vivian Robinson acknowledges that her son still has homosexual feelings, but she has no plans to try to deliver him again. She loves him, she says, and she was very unhappy at the way the prophet from Georgia vilified her son in church. "God doesn't hate anybody," Vivian says. "God loves everybody." To her, many of their family issues had to do with Kevin's age. He was a difficult teenager who is growing easier to relate to. Since he moved out they have a better relationship. And she acknowledges that perhaps she has to allow Kevin—and God—to work things out for himself. "I do look at things a little differently now," she says. "I've learned that a person has to want to be delivered."

But that's exactly the saddest part. Kevin wants so very much to be "delivered":

I ask Kevin whether he would make himself straight if he could. "Yeah, I would," he says without hesitation. "I'm not going to lie—I would love to just fit in and be accepted."

His family's love ... his community's acceptance ... is all the "deliverance" he needs. All they need to do is to want to give it to him!

Via Exploring Our Matrix and Unreasonable Faith.
.
Link - Posted by John Pieret @ 10:05 AM

Comments:
I don't suppose this "prophet" called on any in the congregation who had committed adultery or been rebellious towards their parents to step forward and be stoned to death, did she? But then, of course, as a "prophet" she has a private line to God.

You know, it would be awfully tempting to proclaim oneself as a prophet who has spoken directly to God just to see how outrageous a claim would have to be before believers would reject it. Maybe they wouldn't and you'd end up sitting on a pile of money like Scientology.

Maybe they wouldn't and you'd end up sitting on a pile of money like Scientology.

Worse, it is bullying someone over something they have as much chance of changing as their eye color.