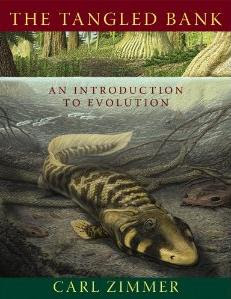 A thought (via The Dispersal of Darwin):

The phylogeny of early animals is also showing how the body plans of living animals emerged not in a single leap, but in a series of steps. Arthropods, for example, have a body plan with a combination of traits (such as segments and an exoskeleton) seen in no other group of living animals. But some Cambrian fossils had some of those traits and not others. ...

Clearly, then, animals did not drop to Earth in the Cambrian Period. They evolved. Nevertheless, the fossil record of the Cambrian chronicles a remarkable pulse of rapid evolution. When paleontologists look at 530-million-year-old rocks, they mainly find small, shell-like fossils. When they look at rocks just 20 million years younger, they find fossils that are recognizable relatives of living arthropods, vertebrates, and many other major groups of animals.

Carl Zimmer, The Tangled Bank: An Introduction to Evolution

Comments:
When they look at rocks just 20 million years younger, ....

20 million years. Let's see. For the critters under consideration, that's likely on the order of 20 million to 40 million generations. That's a loooooog time in evolutionary terms.

The human/chimp split was on the order of 300K to 400K generations ago, so the Cambrian "explosion" took ~90 times longer in generations terms than the evolution of Homo saps from our common ancestor with chimps.

Except that many of the "small, shell-like fossils" are not a separate group, but represent the disarticulated parts of larger organisms, including molluscs, onychophorans and stem arthropods. A fact conspicuously absent from the Disco 'Tutes woeful dvd on the Cambrian Explosion.

Chris, is there a good web reference for the thought that the small shelly fossils are in fact the disarticulated remains of larger identifiable critters?

Call me Mr Smug if you will, but I live only a few of miles away from where the first identified pre-Cambrian fossil was found.

Try Graham Budd's paper for background and references, and Ramskold and Hou's paper for an example.