Mud Wrestling on the Right 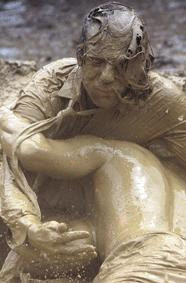 Candace Chellew-Hodge at Religion Dispatches has an amusing food fight among some conservative "heavyweights." Grover Norquist of Americans for Tax Reform against Tony Perkins at the Family Research Council.

It seems Norquist joined the advisory board of GOProud, a gay-Republican advocacy group. That was enough to get Perkins' panties all in a knot:

[Norquist] is well known for his questionable affiliations (from being a middle man for convicted lobbyist Jack Abramoff, profiting from the oppressed Northern Mariana Islands to partnering with Poker Players Alliance to advocate for legislation that ultimately taxes the Internet) and also for his disdain of social conservative issues like life and marriage (once deriding pro-lifers as 'pontificators' and on marriage that he doesn't 'focus on it.') Yet in this case he is actually going beyond his normal 'profit and party before principles' motto.

[M]ost of their "conservative" positions are centered and conditional on that the "gay community" gets special carve-outs. They oppose the Death Tax, but according to their own website they oppose it because it "discriminates against gay and lesbian couples for whom there is no marital exemption." They opposed the health care bill, and again according to their own website, because it "does indeed discriminate against gay families."

Riiight! As if Family Research Council doesn't do the same thing on behalf of the Religious Right, as Christopher Barron, chairman of GOProud's board, immediately pointed out:

Tony Perkins and his cronies at the Family Research Council aren't for limited government. They support policies, like the federalization of marriage and family laws, which would represent one of the greatest usurpation of state's rights in the history of this country.

And the only reason they're for such a "Federal usurpation of States Rights" is that some states are too sane to to let Perkins' crowd have ther way by denying basic civil rights to gays and they hope to do better at the Federal level.

Somebody bring some soda and I'll get the popcorn.
.
Link - Posted by John Pieret @ 3:48 PM