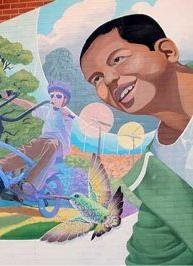 I certainly can't draw more attention to this than PZ Megahertz and Wonkette already have but there are some things that maybe need to be highlighted some more.

The basic story is that a mural was being painted on two walls outside Miller Valley Elementary School in Prescott, Arizona, that was designed to advertise a campaign for environmentally friendly transportation. It features portraits of four children, with a Hispanic boy as the dominant figure.

Some of the good citizens of Prescott took it upon themselves to demonstrate that the real impetus behind Arizona's recent "immigration" law was making Arizona safe for whites only by driving by as the mural was being painted (including by the school children) and shouting "Nigger" and "Spic." A City Councilman, Steve Blair, who had a radio show on the local conservative rant radio:

... spearheaded a public campaign on his talk show at Prescott radio station KYCA-AM (1490) to remove the mural.

In a broadcast last month, according to the Daily Courier in Prescott, Blair mistakenly complained that the most prominent child in the painting is African-American, saying: "To depict the biggest picture on the building as a Black person, I would have to ask the question: Why?"

The obvious reply is "Why not? Apparently, Blair is under the impression that showing dark-skinned children is somehow racially divisive:

... Blair ... insists the controversy isn't about racism but says the mural is intended to create racial controversy where none existed before.

"Personally, I think it's pathetic," he says. "You have changed the ambience of that building to excite some kind of diversity power struggle that doesn't exist in Prescott, Arizona. And I'm ashamed of that."

Riiight! Showing a dark-skinned child on a mural causes some people to shout racial epithets and it is the mural that is causing the problem! Blair certainly has a lot to be ashamed of. The whole ugly mess is only compounded by the school Principal, Jeff Lane, demanding that the artists lighten the skin tones of the children depicted in the mural with the painfully transparent "excuse" that:

"We asked them to fix the shading on the children's faces," he said. "We were looking at it from an artistic view. Nothing at all to do with race."

But this wouldn't be a Haystack post without some giant irony lurking in the wings.

There is one artistic representation in Prescott that is oh-so-true-to-life. Remember Blair's radio show? It is on KYCA, which "boasts" the usual Uber Right Wing suspects: Laura Ingraham, Rush Limbaugh, Michael Savage, Sean Hannity, etc.

Well, the station's logo features a group of jackasses all lined up and ready to go.

see, I am going to give you a taste of PZ Myers' GARBAGE...

Just so you know, you are a minor annoyance. I check my email every once in a while and delete your rants. On the other hand, PZ has obviously driven you mad. You waste your time spamming an obscure blog where no one is ever going to be impressed, while he reaches tens or even hundreds of thousands.

It is really quite pathetic but if you want to make a fool of yourself, who am I to deny you? Have fun!