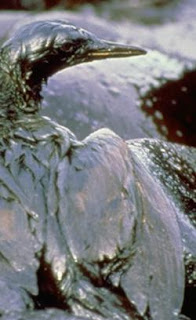 Some fear that there is too much embracing of prayer lately, and not enough looking at scientific solutions. [Len Bahr, former director of the Louisiana's Applied Coastal Science Program] and other scientists are particularly concerned with various cleanup programs, which they say could end up making the Gulf worse, rather than better. Bahr's LaCoastPost, a blog devoted to coastal reconstruction, is highly critical of what he describes as politically motivated solutions, particularly Louisiana Governor Bobby Jindal's coastal barrier project.

The governor is a young earth creationist and notoriously anti-science. So it's not surprising that he is proceeding on the $360 barrier project without the input of scientists, who say the project will do little to keep oil out of Louisiana's marshes and could possibly make the situation worse.

And Bahr said it's really too late to restore the Gulf to a condition better than before the spill. "I believe we are no longer in the Holocene age and have moved on to the Anthropocene age," he said, describing the theory that humans have so altered Earth's ecosystem — climate change being a primary example — that time since the Industrial Revolution should count as its own global epoch.