It was five years ago today that I first put pen to paper ... errr ... electron to computer display ... at this site.

For all those I've infuriated, and the few I've entertained, you have Wilkins to blame for it. It started merely as a convenient place on the web to lodge photographs of John Wilkins' visit to New York and the Howlerfest thrown in his honor at the American Museum of Natural History. 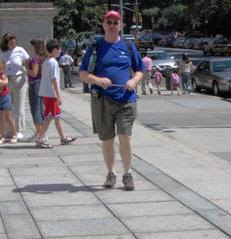 For living five years after blogging? Thanks! ;-)

Thank you for five years* of entertainment! I hope you'll continue for a long time. I'm always looking forwards to your posts.

It was that visit of John's to the Antipodes (from his POV) that got me out of my old haunts on Usenet and into the blogosphere, and eventually to my own blog (actually, I've pretty much abandoned my blog in favour of group blogging at HAO and Opinionated Bastards -- which is, oddly enough, another Wilkins production).

And Wilkins wound up a professor, too. Very profound stuff, no?

It was five years ago today
That Wilkins told the boy to think
He's never gone out of style
And he's guranteed to raise a smile
So may I introduce to you
The act you've known for years
John Pieret The thinking haystack blog!