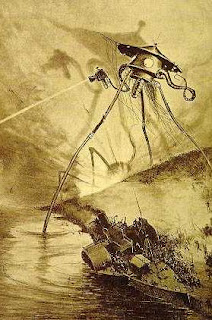 George Neumayr at The American Spectator has an (unintentionally) amusing piece on President Obama's supposed "Islamophilia." (What's up with the Righteous Right's new obsession with Obama and Islam? ... Oh, wait, using religious/ethnic bigotry as a political weapon works for them, doesn't it?)

Quite apart from the sheer looniness of Neumayr's basic premise:

His presidency largely exists for the benefit of one religion, the only religion he appears to consider blameless and holy -- Islam, and not even its moderate variant.

... he proceeds to give as an "example" of Obama's Islamophilia the following:

This week NASA administrator Charles Bolden announced that the space program has adopted a new mission -- to serve as a self-esteem project for global Islam. He informed a reporter with Al Jazeera that when he took the NASA job Obama made it clear to him that "perhaps foremost he wanted to find a way to reach out to the Muslim world and engage much more with dominantly Muslim nations to help them feel good about their historic contribution to science ... and math and engineering."

Earth to Bolden and Barack [otherwise known as Mr. President to twerpy "pundits" - JTP]: These imams don't "feel good" about Islam's centuries-back contribution to science; they feel ashamed of it. As Robert R. Reilly chronicles in The Closing of the Muslim Mind, mainstream Islamic theology today views science as impious/useless because it presupposes that God created the world rationally, a presupposition which is an affront to God (under the twisted metaphysics of Islamic theology) since it is seen as a limitation on his freedom and transcendence.

"The catastrophic result of this view was the denial of the relationship between cause and effect in the natural order," writes Reilly. "In The Incoherence of the Philosophers, al-Ghazali, who vehemently rejected Plato and Aristotle, insisted that God is not bound by any order and that there is, therefore, no 'natural' sequence of cause and effect, as in fire burning cotton or, more colorfully, as in 'purging of the bowels and the using of a purgative.' Rather than a clear and binding relationship between cause and effect, there are merely juxtapositions of discrete events that make it appear that the fire is burning the cotton, but God could just as well do otherwise."

Now, what I'd like to know is just how is that different from this:

One of the assumptions you need to have in mind in terms of the assumption about the age of the earth that the scientific assumption comes down to this: uniformitarianism. The assumption that is crucial to establishing the age of the earth is based upon an intellectual assumption that was made in the early 19th century by Charles Lyell and others called uniformitarianism which assumes that the way we observe processes now is a constant guide to how physical processes always have operated. Thus a steady state of understanding physical processes is what we're talking about as the secular scientific assumption. We gauge these things and measure these extrapolated billions of years based upon the assumption, the scientists will tell us, that things as they are now are as they have always been in terms of physical processes.

Maybe President Obama should refrain from reaching out to Southern Baptists too.
.
Link - Posted by John Pieret @ 10:20 AM

Comments:
Fascinating to see what hash theologians make out of Hume, ain't it?

Last year, I encountered an argument from a Christian apologist to the effect that Hume was right (see comments on this post), and it takes God to allow us to justify knitting together mere correlation into causation and a coherent world-picture. Al-Ghazali seems to have taken the opposite tack: that the world is not necessarily coherent, as that would limit God.

Now Mohler is spouting the standard dishonest YEC rubbish about uniformitarianism. It's dishonest because they only apply their faux-Pyrrhonianism when they don't like the causal-evidential answer. He'll agree with Al-Ghazali or with my apologist of last fall, whichever is more convenient at the moment.

Interesting stuff from your link. It was mentioned that a recording of the debate was being uploaded. Do you have a link to that?

So what does Neumayr think about the International Space Station? I'll bet it boosts his self esteem (It's not doing much for science).