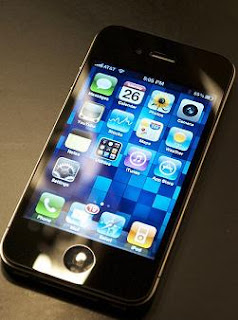 This can't be a good thing:

Publishers of Christian material have begun producing iPhone applications that can cough up quick comebacks and rhetorical strategies for believers who want to fight back against what they view as a new strain of strident atheism. And a competing crop of apps is arming nonbelievers for battle.

"Say someone calls you narrow-minded because you think Jesus is the only way to God," says one top-selling application introduced in March by a Christian publishing company. "Your first answer should be: 'What do you mean by narrow-minded?' "

For religious skeptics, the "BibleThumper" iPhone app boasts that it "allows the atheist to keep the most funny and irrational Bible verses right in their pocket" to be "always ready to confront fundamentalist Christians or have a little fun among friends."

Here's an admission that will warm the cockles of atheists' hearts ... as if they had any:

Sean McDowell, the editor of "Fast Facts" and some textbooks for Bible students, said he has become increasingly aware of a skill gap between believers and nonbelievers, who he feels tend to be instinctively more savvy at arguing. "Christians who believe, but cannot explain why they believe, become 'Bible-thumpers' who seem dogmatic and insecure about their convictions," he said. "We have to deal with that."

Michael Beaty, chairman of the philosophy department at Baylor University, a Christian university in Waco, Tex., was not so sure.

"We'd be better off if these people were studying Nietzsche and Kant," he said.

Comments:
There's opportunities for fun here. For example, the believers apps should be called 'i-Believe'. Then atheists and agnostics could respond with apps called 'i-Don't'.

I'm more concerned that they'll turn into shoot-em-ups with the believers smiting the atheists with tunderbolts and earthquakes and the atheists retaliating with "reason rays."