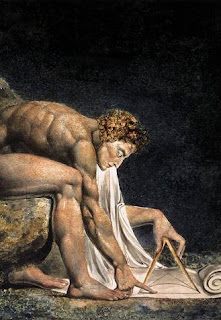 A thought (via The Dispersal of Darwin):

I noticed an outrageous banner ad at a creationist blog proclaiming: "2013: Darwinism Falls." Ugh. I understand that there are people who think (mistakenly) that there's a big crisis in evolutionary biology and it's going to collapse, but I've never encountered anyone arrogant enough to set a date. So I clicked on the ad, and it was pretty sad. It's some site run by an engineer. What is it with engineers? Why is it the most arrogant and vitriolic antievolutionists are engineers? I don't know, but here's a prediction for you, Mr. 2013-Darwin-Falls: It ain't gonna happen. I was just there at Evolution 2010 (unlike you), and I've been to many of their past conferences (also unlike you). They're doing fine. They're plugging right along. There's lots of excitement. Lots of research funding. Thousands of researchers. They're not going anywhere. So unless Jesus Christ returns bodily to rule the earth in the next three years, 2013 will see evolutionary biology continuing to enjoy the same cultural power they have now.

- Dr. Todd Wood, young-Earth creationist and Director of the Center for Origins Research at Bryan College and President of the Executive Council of the BSG: A Creation Biology Study Group

Comments:
I was curious about the "Nobel Prize for Science in 1983". Barbara McClintock won the Nobel Prize in Physiology or Medicine in 1983.

...don't forget the dentists, giving the engineers a run for their money

"... 2013 will see evolutionary biology continuing to enjoy the same cultural power they have now."

I read that on Wood's blog and was taken by the "cultural power" phrase and by the shift from "evolutionary biology" to "they."

Oh man. I just looked at the site. It's good old Perry Marshall, once a regular on Internet Infidels who had this irrefutable proof of the existence of God and the bankruptcy of evolution. He was second only to Ed (Man older than coal!) Conrad in perseverative looniness. His argument is no more than 'DNA is a code, codes require codemakers. QED.'

Well..um...er, I have a degree in engineering. My caveat is that my first degree was in Physics...I needed the EE to get a job....

And I do argue with the fundie across from me in work...although ever since I showed him the unicorns in the Bible he's been pretty quiet.

I read that on Wood's blog and was taken by the "cultural power" phrase and by the shift from "evolutionary biology" to "they."

He is a YEC. You can't expect that denialism of science will be completely absent.