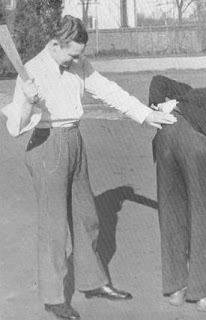 As I'm a little under the weather tonight, here's Nick Matzke at The Panda's Thumb practicing the above on Casey Luskin by demonstrating, in what would be excruciating detail for anyone with an ounce of shame -- a condition Luskin does not suffer from -- the difference between rhetorical flourishes meant to obscure the truth and actual evidence and reasoned argument meant to illuminate the truth. One of several good quotes from Nick:

[T]hroughout his posts over the 5 years since the Kitzmiller trial, Luskin again and again fails to realize that court decisions are based on what evidence is entered at trial, where both sides have equal opportunity to enter evidence and testimony, and subject it to cross-examination. This is really surprising, considering Luskin is supposed to be a lawyer. Decisions are not based on things not entered into evidence, dreamed up via obsessive wishful thinking long after the trial, published by witnesses who withdrew from the trial and thereby avoided cross-examination, or published in friend-of-the-court briefs which are also not subject to cross-examination. I don't want to help Luskin, but given Luskin's belief in the credibility of the allegedly "pro-ID" articles that should have been entered into evidence, he would be better off arguing that the Defense did a bad job defending ID, than he would be arguing that the Court should have made a different decision, given the actual evidence actually put before it.

I don't think that argument would be much better, of course: the Defense actually followed the ID literature closely, talked to its biggest experts, and got ID's two most credible academics to testify. They did a credible job presenting ID as it was available "off the shelf" in 2005. But there just wasn't that much on ID's shelf, especially compared to evolution's shelf – heck, evolution had a bigger shelf devoted just to the single topic of the evolution of the vertebrate immune system!

Everything I've said above is made even worse by the fact that the issue at trial was not "is there some marginal chance that ID might have the tiniest smidgen of credibility, if you squint just right, if you ignore everything inconvenient, and if the wind is blowing the right direction and the moon is in the correct phase." Rather, the issue was "is this ID stuff on the level of what is typically expected to be taught in public school biology classrooms and textbooks?"