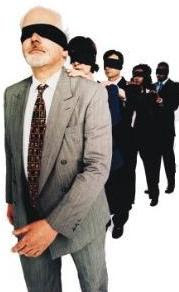 Well, well! Wadda ya know! The Discovery Institute's Ministry of Misinformation is peddling another "peer-reviewed" article that "expressly endorses intelligent design (ID) via an exploration of a key question in ID thinking." This time the article, "Information and Entropy -- Top-Down or Bottom-Up Development in Living Systems?," appears in that prestigious scientific publication: the International Journal of Design & Nature and Ecodynamics, which describes itself as:

... act[ing] as a channel of communication for researchers from around the world working on a variety of studies involving nature and its significance to modern scientific thought and design.

Even then, the editors felt the need to note that "[t]he reader should not assume that the Journal or the reviewers agree with the conclusions of the paper." Some peer review!

There is much gobbledygook that I am not qualified to criticize but it seems to boil down that we need "the addition of outside intelligence, [or else] raw matter and energy will not produce auto organization and machinery." Hmmm, exactly how does one add "outside intelligence" and what is the thermodynamic explanation of how it comes to be added? Oh, wait! Maybe this explains it:

This latter assertion is actually repeatedly borne out by experimental observation - new machinery requires intelligence. And intelligence in biological systems is from the non-material instructions of DNA.

Riiight! The Watchmaker Analogy and miracles!

Nor is this much of a surprise, given that the author is Andrew McIntosh, a chemical engineer (Salem Hypothesis, anyone?) and a young-Earth creationist. Now, Professor McIntosh may well understand the thermodynamics of blunt chemical reactions but I'm hardly going to take the opinions of someone too dense or too ideology-ridden to understand the evidence for the age of the Earth and universe for anything outside the narrow confines of his field.

That the DI will tout this as evidence of the "science" of ID shows just how desperate they are for any scrap of scientific respectability.
.
Link - Posted by John Pieret @ 10:23 PM

Comments:
I wonder whether there are any creationists working up a rejoinder to the ideas in physics about gravity being an effect of entropy? Someone should point out to these physicists their basic misunderstanding of thermodynamics!

"[T]here is a perfectly consistent view which is a top-down approach where biological information already present in the phenotypic creature (and not emergent as claimed in the traditional bottom-up approach) constrains the system of matter and energy constituting the living entity to follow intricate non-equilibrium chemical pathways."