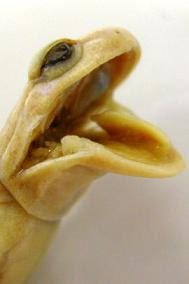 When I first heard about David Klinghoffer's sneering, even sexist ("she seems bright enough"), attack on Lauri Lebo, I hoped Ms. Lebo noticed, since, given their relative abilities, I expected things to turn out badly for Klinghoffer.

Danged if I wasn't right:

I have to admit, when I saw over the weekend that I had been called out by the Discovery Institute, the conservative think-tank committed to promoting intelligent design, my first thought was of what the late great Molly Ivins once said after she had been attacked by Rush Limbaugh on his radio show.

"It's like being gummed by a newt. It doesn't actually hurt but it leaves you with slimy stuff on your ankle."

Trust me, it goes downhill for Klinghoffer and the other DI drones from there!
.
Link - Posted by John Pieret @ 9:27 PM

Comments:
I'd say that Klinghoffer and the DI were well and truly pwned. I wish I could write like Laurie Lebo.

"When I first heard about David Klinghoffer's sneering, even sexist ("she seems bright enough"), ..."

We evolutionists are much more civil than that. For instance, when has any evolutionist ever directed that particular sneer at Denyse O'Leary?

Lauri Lebo is a gem amid the dross that is most of journalism these days.

Kudos to Molly Ivins for that quote, and to Laurie Lebo for picking it up. I love Ivins and miss her. I've read about Lebo. I'll have to get better acquainted with her work.

I'll have to get better acquainted with her work.

Read her The Devil in Dover. It's ther best book about the Dover tial.