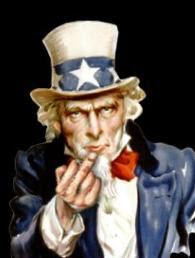 Pat Robertson apparently thinks the First Amendment guarantee of freedom of religion has been revoked ... or wishes it was.

Not only has Robertson's badly misnamed American Center for Law and Justice filed a frivolous lawsuit against the so-called "Ground Zero Mosque," he has now accused local officials in Murfreesboro, Tennessee of possibly being bribed in order to approve a place of worship in their town ... as if it was necessary as long as local zoning and building codes are met.

And his stated reason for opposing the mosque in Murfreesboro is truly stupid*:

He went on to say that Muslims could end up taking over the city council to pass ordinances that require public prayer and foot washing. The new Islamic Center is outside the Murfreesboro city limits. An existing center is much smaller and has been in the city for years.

Robertson said a Muslim takeover would mean girls would have to wear headdresses to school.

It's a simple case of projection.

* On the other hand, Robertson's reason isn't the absolutely stupidest basis for fear of the mosque. This is:

"What I sense is a certain amount of fear fueling the animosity," said Jim Daniel, a former county commissioner and former county Republican Party chairman, sitting down for lunch one day last week at City Cafe. Residents worry that "the Muslims coming in here will keep growing in numbers and override our system of law and impose sharia law."

It's a shame that so many Americans are so deeply ignorant of the government they live under.
.
Link - Posted by John Pieret @ 11:24 PM

Comments:
If those people get a majority, then they'll force our schools to teach their stories as science, put up displays of their faith on their holidays, and make our kids read their holy books.

We have to pass laws that prevent a majority from forcing their religion on us.

We have one. It's called the First Amendment.

Ah, so now we have a contrast between "the eighth-century desert world" and "a modern view of the world" -- so, which one includes thinking that earthquakes and hurricanes are best explained as types of divine punishment?

... which one includes thinking that earthquakes and hurricanes are best explained as types of divine punishment?

Not to mention claims that the Earth is 6,000 year old based on the best science of bronze-age shepherds.

fuuunny
As any student of (the Right) history knows, not only does Islam build mosques to celebrate their conquests, they build eating places that bring their strange cuisine where you can hardly get a good ol' Bacon Cheese Burger and literally force it down the throats of the conquered people!

IslamoFascists all over the world will celebrate these food carts as proof of their triumph over America on 9/11!

the best science of Hindustanic bronze-age shepherds, claims that the Earth is millions or bilions years old based on several folk lore in sanskrit