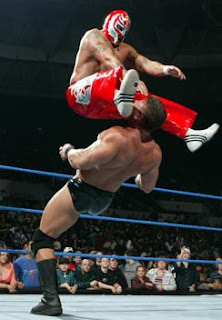 We are being treated to quote mining, dishonestly denialist creationists, out to deceive the public about science, in a death-cage match against video manipulating, dishonest political hit men proud of their record of deceiving the public (and by extension, certain cowardly politicians who, nonetheless, have had the good grace to apologize for their stupidity).

Who am I going to root for?

It's that minion of the Undiscovery Institute, David Klinghoffer, challenged by Andrew Breitbart's minion, John Nolte.

Klinghoffer starts it off by lamenting the late William F. Buckley Jr., Irving Kristol and Father Richard John Neuhaus ... as compared to the likes of Breitbart. According to Klinghoffer:

... that is what I signed up for [when he became a conservative]: a profound vision granting transcendent significance to public life and hope in private life. The goal wasn't to defeat Democratic officeholders or humiliate left-wing activists. It was, and still is, with those who remember, to save civilization.

Now, Buckley had the redeeming characteristics of erudition and a certain self-deprecating humor (I well remember a press conference back when he ran for Mayor of New York when, asked what the first thing he would do if elected, he replied "Demand a recount!") and Neuhaus I never read enough to know. But Irving Kristol? He of the infamous sneering at the very idea of democracy?:

That contempt for human beings is at the heart of Klinghoffer's constant refrain that "ideas have consequences," by which he means "people can't stand reality." Even if that were true, it is hardly "a profound vision" of the "transcendent significance" of anyone. But The Sensuous Curmudgeon, himself a proud conservative, has already pissed from a great height on Klinghoffer's notion of what "conservatism" is and there's no need for me to waste precious bodily fluids on intellectual gnats like Klinghoffer.

What really amuses is the obvious heat that Breitbart is feeling:

[D]estroying Andrew Breitbart is the new priority number one and that the latest set of instructions raging through JournolistLand are to find and/or help to create a wedge between the Slayer of ACORN and the conservative community. And what better way to do that than with a conservative willing to go on the record and speak out against him?

The idea, obviously, is to toxify Breitbart in such a way that no "reputable conservative" would ever associate with him again. Yesterday, in that beacon of journolista integrity called the Nearly Bankrupt L.A. Times, we got an early first glimpse of just how well that plan is working.

After using the front page of their Sunday editorial section as bait, the best the Nearly Bankrupt L.A. Times could come up with was someone they would normally mercilessly ridicule over cocktails, Intelligent Design proponent David Klinghoffer. Which isn't to say Klinghoffer didn't perform well.