Why Some People Hate America 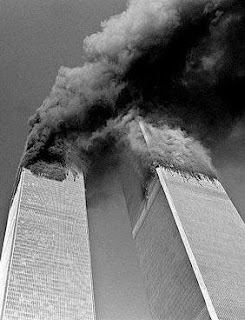 Here's an example of "thinking" by the Righteous Right: "There's Nothing Gay about Being Gay" by Alan Caruba:

I would avoid examining gay "marriage" if I could, but the gay and lesbian community will not let me.

'Drat those nasty gays for making me think ... when I'm so bad at it!'

With seven decades of life under my belt, I have had plenty of time to learn about homosexuality, know homosexuals, and to have arrived at some conclusions about it. My basic conclusion is that homosexuality is hard-wired into an individual at birth. It is not, in my opinion, a lifestyle option one learns about and decides to choose.

Those who discover their homosexuality, early or late, know well that it positions them outside the acceptance of our society and those worldwide. As such, it is a cause of much abuse and, to varying degrees, self-hatred.

The three monotheistic religions made it clear in their sacred texts that homosexuality is a sin, but that is a matter of belief.

Now, that's better than most on the Rabid Right ... no talk of "lifestyles" or "reparative therapy" but from a good start comes much bizarre "reasoning," not nearly limited to the notion that self-hatred is somehow deserved because of the irrational prejudices of others.

On a strictly physiological basis, nature ordains that there are two sexes, male and female, and they exist for the propagation of the species. That's why marriage is regarded as essential to any society.

Since homosexuals must function within our society, one might reasonably assume they would accept society's need to maintain marriage as between a man and a woman, but among militant homosexuals, there has been a growing movement to require a redefinition of this ancient model.

Well, no! That was a major point of Judge Walker's decision that Caruba has obviously not read, even though he feels qualified to pontificate on it. The state, which has controlled marriage throughout American history, has never inquired of people seeking to get married whether or not are willing or able to procreate, much less required that they be so. Worse, there is a complete disconnect here. Opening marriage to gays no more threatens procreation of the species than allowing women past menopause to marry ... as we have just as 'anciently' allowed. Nothing about gay marriage will stop women and men f**king.

Proposition 8 was approved by voters by a margin of 52 percent in favor versus 48 percent who opposed it. The majority of U.S. States have laws recognizing marriage as between members of the opposite sex.

So, our fundamental rights depend on local bare majorities? If the Bhagwan Shree Rajneesh moves his commune into some remote county and establishes his own city council, he can outlaw Christianity? No, that's the idea of our Bill of Rights: to protect minorities from the tyranny of the majority.

Then there is this little bit of nonsense:

What makes Chief U.S. District Judge Vaughn Walker's decision questionable, beyond issues of the law, is a factor noted in a Washington Times article that reported "The Los Angeles Times and San Francisco Chronicle have both reported that Judge Walker's sexuality, though he is not 'out', is an open secret in California gay and legal circles."

As such, he should have recused himself from the case.

If it was an "open secret," then the proponents of Prop 8 knew about it. And yet, they did not ask the judge to recuse himself. In any event, if the judge had been a conservative Protestant, a Catholic or a Mormon ... all groups that supported prop 8 ... imagine the outrage if the plaintiffs had asked him to recuse himself. Indeed, if Walker should have recused himself because he had a stake in the decision, then all the Catholics ... whose hierarchy has opposed gay marriage ... on the Supreme Court would have to recuse themselves as well. Let's see ... that's Chief Justice John Roberts, Samuel Alito, Sonia Sotomayor, Clarence Thomas, Antonin Scalia and Anthony Kennedy. That would leave Stephen Breyer, Ruth Bader Ginsburg and Elena Kagan to decide the case. If I was the plaintiffs, I'd take that!

I have not known that many happy homosexuals.

Oh, gee! I wonder why that might be? People who have no choice in their sexuality, as Caruba admits, are told they are 'dangers to the species,' not 'acceptable to our society' and should be content to 'shut up and be grateful to be able to sit in the back of the bus.' Naw! No reason at all to be unhappy!

This is so stupid I won't even dignify it with a response except to note that, if one's rights, even arguably, depend on making good lifestyle choices, the vast number of obese Americans have no rights:

Putting aside the link between homosexuality and AIDS, such studies as have been undertaken have generally concluded that being homosexual increases one's potential for a variety of bad lifestyle choices.

This is hardly less stupid:

The debate about gay marriage is not about civil rights and certainly not about the equal rights amendment which was passed following the Civil War to ensure that newly enfranchised black citizens received formerly denied protections. The 13th Amendment, ratified on December 6, 1865 bans slavery. The 14th Amendment was ratified on July 9, 1868. Neither applies to homosexuality.

The 13th and 14th Amendments was not aimed at "black citizens," except as an accident of history. At the time, the most pressing problem was our denial of rights to black slaves. But those amendments were aimed at establishing the rights of human beings, which includes gays.

It seems to me that the issue does little other than to inflame the fears and prejudices of the majority for no good purpose.

There is no right to have the government cater to the fears and prejudices of the majority, especially at the expense of the fundamental rights ... such as to marry who we choose ... of any minority.

To say that the irrationality of the majority outweighs the rights of anyone is a deeply un-American and unpatriotic position.
.
Link - Posted by John Pieret @ 11:56 AM

Comments:
On a strictly physiological basis, nature ordains that there are two sexes, male and female, and they exist for the propagation of the species.

Making claims for what "nature ordains" is not so good when one is ignorant of the vast amount of nature that does not behave in the manner one supposes. Parthenogenesis? Hermaphroditism?

...not to mention all that homosexuality occurring in nature.

1) As a historian I find it fascinating when such people write or say things like:

…there has been a growing movement to require a redefinition of this ancient model.

There is nothing ancients about the current western model of marriage it came into being in the 16th century as part of the Counter Reformation, largely to prevent priests getting married. Before the nineteenth century many people in Europe didn’t actually get married they just lived together.

2) I have not known that many happy homosexuals.

All of my homosexual friends are just as happy as my heterosexual ones.

I had thought that the reconstruction amendments were also an expression of a view of the United States as a union - that many people of that time saw the Civil War as about a conflict between the unionist view of the USA and the "sovereign states" view, at least as much as about emancipation. One could read the 13th amendment as addressing the slavery issue and the 14th amendment as addressing the unionist issue. Putting a seal, so to speak, on what had been settled on the battlefield, with the hope that it would avert that horrible way of settling future disputes over those issues.

But I'm no expert.