Of Calliopes and Intellectual Cotton Candy 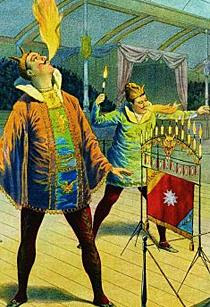 The Discoveryless Institute’s Stupendous Traveling Circus and Amazing Pandemonium Show recently made a visit to Southern Methodist University. The Sensuous Curmudgeon has already featured the student newspapers’ report of the event, which includes the incredibly garbled statement that:

While some who study geology believe in the Cambrian explosion, in which animals did not evolve from small organisms but were created by a 60-million-year long explosion, Darwin thought otherwise.

If we assume that many of the students at SMU and, indeed, at colleges and universities all around the country, similarly have neither the background knowledge nor the inclination to understand even the simplest facts the DI mangles in its propaganda campaign, there is little wonder that even less well educated Americans so easily fall prey to the snake oil salesmen from Seattle.

On the other hand, it is heartening to see the reaction of the SMU faculty to the charlatans in their midst:

Last Thursday evening, the SMU community witnessed another dishonest attempt to present a particular form of religion as science, entitled "4 Nails in Darwin's Coffin: New Challenges to Darwinian Evolution". It was designed and presented by Seattle's Discovery Institute (and its subsidiary the Biologic Institute). This was a follow-up to their equally dishonest 2007 presentation "Darwin vs. Design".

We were outraged by the dishonesty of Thursday's presentation, but not entirely surprised by it. The Discovery Institute is a well-financed organization that has repeatedly attempted to discredit Darwinian biology and thereby advance its brand of religion called Intelligent Design. We do not object to religion as such. But we do object to blatant distortions of Darwinian thinking, and to pseudo-scientific alternatives to it that are falsely alleged to be better supported by the evidence.

Even better, John Wise, a professor in the Department of Biological Sciences at SMU, has put together a resource debunking the DI's dog and pony show, which features its slickly disingenuous movie, Darwin's Dilemma. There are other resources about ID at professor Wise's faculty page as well.

The final word should go to the SMU faculty:

The Discovery Institute is a fringe group of pseudo-scientists who are busily trying to pass themselves off on the unwary as legitimate scientists.

All-in-all, I think they are being kind.

Updates: The Sensuous Curmudgeon points to where the Empire Whines Back and also to where the Religious Studies Department of SMU has joined the Biology Department in describing the vacuity of ID and the people who peddle it. Then Casey Luskin does the same thing by ... well ... being Casey Luskin.
.
Link - Posted by John Pieret @ 10:40 AM

Comments:
I think you do carnies a disservice with the title of this post, associating their trade with that of the Disinformation Institute.

You may be right. Carnies have the honorable objective of bringing people entertainment and even wonder in exchange for their money, while the DI only wants to make everyone else subject to the same sour, kill-joy god they suffer under.