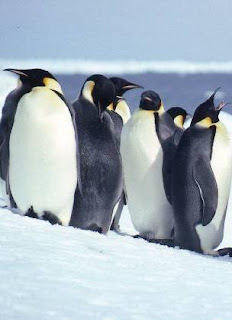 This is a repost from October of 2005 (while I wait for the Percocet to kick in), though I've added a picture as is now my custom.

Apparently conservatives have fallen love with the nature documentary, "March of the Penguins". According to conservative film critic and radio host Michael Medved, quoted by Jonathan Miller in his New York Times article "March of the Conservatives: Penguin Film as Political Fodder" (still available as a pdf file):

[March of the Penguins is] the motion picture this summer that most passionately affirms traditional norms like monogamy, sacrifice and child rearing.

Except, of course, it doesn’t. As P.Z. Myers points out at Pharyngula, penguins only practice seasonal monogamy, getting a new mate every breeding season. Worse, as P.Z. goes on to explain:

It was a movie about pitiless Darwinian circumstances. Drop the egg, it freezes and the embryo dies. Newborn chick wanders away, it freezes and dies. One parent dies of predation or weather, the other has to abandon the young to starve, freeze, and die.

Emperor Penguins are beautiful birds and amazing examples of evolutionary adaptation but if my parents were planning on practicing "penguin family values", I’d be looking for a safer place to live.
John Wilkins, at his Evolving Thoughts site, has pointed out that this is:

. . . an old tradition in Christian treatment of nature. Ever since the classical period, there has been a tradition of drawing moral lessons from organisms. Of course, such people only read into the organisms, like the lion, the eagle or the fox, what they want to find there. It's not like they actually learn from nature or anything.

Or, as Bobby Bryant put it on talk.origins, they are just quote-mining nature.
.
Link - Posted by John Pieret @ 1:09 AM

Comments:
And the Pope is 100% correct: The Nazis and the atheists both wish to ABOLISH FAITH....