The Misadventures of Mindless Idiots 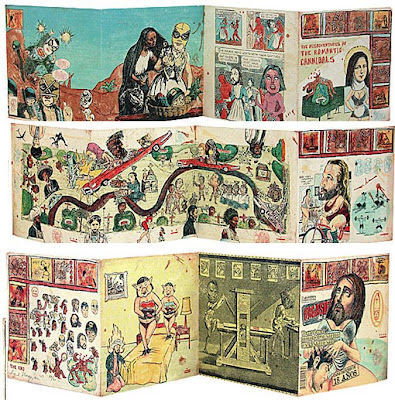 Somewhere on the high plains, a woman, wearing a T-shirt emblazoned with "Tougher than Nails" (that should have read "Dumber than Dirt"), entered a museum in the badly misnamed Loveland, Colorado and attacked an artwork entitled "The Misadventures of Romantic Cannibals" while screaming "How can you desecrate my Lord?"

It seems that any figure sporting a beard and long hair is automatically a depiction of Jesus, even if the figure is also sporting rather bodacious female breasts.

The artist, Enrique Chagoya, specifically denies trying to portray Christ and, according to the curator, Bud Shark, of the exhibit that the work was a part of:

"(The attack) is the direct result of the inflammatory and false descriptions of the piece in the press and by those protesting its inclusion in our exhibition," he said.

"The controversial image has been demonized as 'pornographic,' 'obscene' and 'depicting Jesus in a sex act' when none of this is true."

And, by the way, that second panel from the left on the bottom row ...

Via Ed Brayton at Dispatches from the Culture Wars
.

Comments:
I believe the incident happened in the town of Loveland, Colorado -- not Loveland, Montana. The woman who desecrated the artwork was from Montana.

Oh, I know ... I apologize to the sane folks of Colorado for raising their hopes that Loveland had somehow been banished to Montana!