The Science of Moving Hot Air 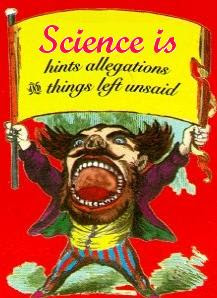 Well, the Ministry of Misinformation over at the Undiscovery Institute has imported new talent and, I must say, given DI's commitment to actually performing science, they have chosen well:

Guy Coe ... graduated from the University of California at Davis with a B.A. in Rhetoric and a minor in political science ... his career has taken him from Executive Salesman, to News Reporter, to U.S. Senate Communications Aide, to Tour Guide, to Retail Management ...

Mr. Coe's resume is a perfect fit for the DI's mission.

His skills at saying little while seeming to say much and covering all in a fog of gobbledygook ... a critical talent for convincing others that religious assertions are "scientific" ... are impressive. I, for one, stand in awe of his somehow managing to make it seem like scientists are using the multiverse to explain abiogenesis!

Despite admitting that methodological naturalism ... that is, science ... with its insistence on explanation through natural processes, has been a wonderful heuristic for understanding the natural world, Mr. Coe proposes abandoning that heuristic. Somehow, however, he never quite gets around to giving any grounds for doing so, much less any sort of criteria for when we should do so. In short, he wants to claim the right to drop the very strategy that has made science so successful whenever he chooses to, while still getting to call his beliefs "science."

I'd suggest he go back for a refresher course in rhetoric but supporting some things is just beyond any amount of slick talk.
.
Link - Posted by John Pieret @ 11:35 PM

Comments:
How could you do this to me John? I actually read that crap and that at nine o'clock on a Sunday morning! For somebody with a degree in rhetoric, Mr Coe writes excrutiatingly badly.

Man, talk about word salad. Thony's got it right.

Guy Coe? Hmmm....couldn't have been written by a little animated gecko, could it? It would fit right in with the other reptilian types there.

My apologies for the timing but finding myself on a Saturday night neither able to go to sleep nor to go out for a drink, there was nothing better to do than to spread the knowledge of Mr. Coe and his ... ummm ... talents.

As to the possibility of his name being a truly horrible nom de plume, I confess that never occurred to me ... which, given what I knew of him so far, was a failure on my part.

But if it is a nom de plume, he has gone to the trouble of creating it a Facebook page, complete with wife, approximately two children and a dog.

No doubt there is bitter disappointment within the Society of Jesus at Mr. Coe's admission on his Facebook page that he is a '77 alumnus of Jesuit High School.

BTW--do you have an email for off-blog correspondence?

You can use jtpieretATgmailDOTcom but leave a message here that you'ved used it, as it is mostly for sorting out spammers.

My apologies for the timing but finding myself on a Saturday night neither able to go to sleep nor to go out for a drink, there was nothing better to do than to spread the knowledge of Mr. Coe and his ... ummm ... talents.

No apologies necessary. It sounds as if he has at least one trait in common with the homophonic lizard. He's going to be just as annoying.

Thanks, John. I'm sending you something now....