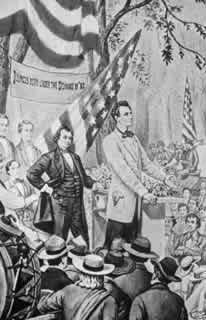 Formal debates -- the pitting of two sides of an issue against each other with more-or-less formal rules, lasting an hour or two -- are essentially useless as far as the audience is concerned -- though the participants can learn much about how to structure and present an argument, which is why schools often have debating societies. But any issue worth debating cannot be fairly aired in the span of an hour or two by participants who may not have equal debating skills. The Lincoln-Douglas debates, spanning twenty-one hours over seven dates, might be an exception, but notably debated slavery from only the perspective of white Americans.

It's worse if the audience comes to the debate with a set opinion on the question -- and who is likely to be interested in attending a formal debate unless he or she already knows something of the issue? But when the organizers of the event prime the audience with arguments in favor of one side and against the other, it can hardly be called a "debate" at all. As noted at Open Parachute and Friendly Atheist, the recent "debate" between William Dembski and Christopher Hitchens falls very much in the latter category.

The event was held at Prestonwood Christian Academy, primarily before the middle school and high school students. Hitchens amusingly says, after surveying the audience, that he feels "like a Daniel being introduced to a den of, I'm sure very charming, lion cubs." To its credit, the audience got the joke even before he finished and laughed.

What wasn't amusing in the least was the "Discussion Guide" the school published as "a tool used either to prepare students for this debate or answer questions following the debate." A better description would be "a tool to load the dice so there is no debate."

I said it wasn't amusing but that's not strictly true. It's intent wasn't, but the execution was, in several instances, quite amusing ... such as this:

A nation once strong in its faith in God, once labeled a "Christian nation" and dubbed as the "city on a hill," America has lost its spiritual moorings and is adrift in the relativistic sea of tolerance, equality, and affluence.

Of course, the United States is a "nation" only by virtue of its Constitution, which nowhere mentions that it is a "Christian nation." Quite the opposite, the Constitution's Bill of Rights made sure that the national government would establish no official religion ... a Bill of Rights that was extended to state and local governments after a great Civil War fought for the principle that all people are entitled to those rights. And it wasn't the nation that was called "a city on a hill," but the Massachusetts Bay Colony which, in case the authors missed it, no longer exists.

But if tolerance and equality are something to be "adrift" in, rather than the faith of God, then that God must be intolerant and biased. And if affluence is a bad thing, why are so many Christians today in favor of free enterprise and against communism on the grounds that some people should be allowed to be more affluent than others?

C.S. Lewis, tongue-in-cheek, wrote this, "If Darwin's theory of Evolution was correct, cats would be able to operate a can-opener by now." Funny, yes; but also profound.

It's funny on its own terms only if you don't understand the science of evolution and its profundity resides only mistaking your own ignorance for wisdom.

It's funny to the rest of us because we see that, instead of arguing against the modern science of evolution, these people are stuck arguing against something like Lamarck's version, where species are on a kind of escalator, becoming more complex (and "higher" on the "Chain of Being") over time. Maybe in such a scheme cats could be expected to become human-like but not in modern science. In short, it is one small step above asking "if humans came from apes, why are there still apes?"

Then this "Guide" trots out the hoariest and perhaps most dishonest of all quote mines:

To suppose that the eye with all its inimitable contrivances for adjusting the focus to different distances, for admitting different amounts of light, and for the correction of spherical and chromatic aberration, could have been formed by natural selection, seems, I freely confess, absurd in the highest degree.
~ Charles Darwin

If you need to know why the use of the quote mine demonstrates a willful ignorance of science and a complete disregard of scholarship, if not an outright lie, on the part of the authors of the "Guide," go here.

But to see just how low these supposedly "godly" people will go, consider this "discussion" of Hitchens' cancer:

Hitchens is going through chemotherapy fighting the cancer that is ravaging his body. From the evolutionary standpoint this effort appears to be counter-productive to the death sentence that nature has given Hitchens, and one would question why someone who believes so strongly in evolution would attempt to counter its effects on mankind.

"Mankind" is not the focus of natural selection, the individual organism is.* Any organism will fight for its own survival, using whatever abilities evolution has given it, even if it is not the "fittest" member of its species.

Since humans have evolved as a social species, we have an even more complex "fitness." In a troop of early hominids, an old male who knew how to make good stone tools but who could no longer scramble up a tree to avoid a predator likely died. However, if some individuals in that troop were smart enough to recognize the value of the old tool maker to their own survival and were brave enough to drive off the predator, even at the risk of their own lives, their fitness could be improved by their continued ability to use superior tools.

But the inanity of the "argument" isn't what rankles. Why even go there at all? If you had the slightest confidence in the strength of your case, why not pass in silence over Hitchens' misfortune? I'm sure Hitchens, confronted with such an "argument" (I haven't watched the debate itself), would respond with complete grace and all the acerbity it deserves.

But it says much about the authors of this "Guide" that they thought the best way to teach "morality" to children was to stoop to such tactics.

* With many caveats that a blog post is no better able to address than a formal debate.

Update: William Eric Meikle and Eugenie C. Scott have an article (pdf) in Evolution: Education and Outreach entitled "Why Are There Still Monkeys?"
.

Comments:
How much do you want to bet that the C. S. Lewis quote is mangled or fabricated?

I don't know if the quote is fabricated, but it appears to at least be misattributed. A cursory Google search appears to indicate that the quote comes from an editorial cartoonist named Larry Wright.

I thought it was a rather unsophisticated thing for Lewis to say but didn't consider the possibility that they'd treat a Christian hero the same as they'd treat Darwin.

As any [strike]can opener[/strike] cat "owner" knows, cats *do* know how to work a can opener.

As any [strike]can opener[/strike] cat "owner" knows, cats *do* know how to work a can opener.

... they just choose not to stoop to manual labor.